“When we sit together, we understand what the other one is going through” 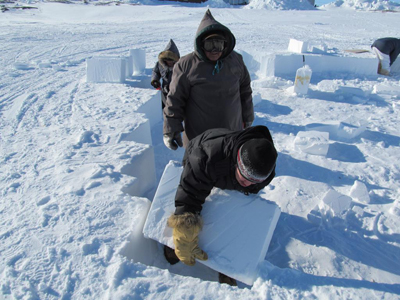 Members of Unaaq men’s association lead a number of training workshops for young men in Inukjuak, like this igloo-building workshop. (PHOTO COURTESY OF UNAAQ)

A recent rash of armed confrontations with police in Nunavut and Nunavik have underscored a pressing need for programs to better support troubled Inuit men.

Since the end of March, police in both regions have responded to at least five incidents involving violent, armed men, most of whom barricaded themselves inside a home.

The most recent included two lengthy standoffs in Iqaluit, one that spanned three days and shut down an entire neighbourhood.

The incidents seem to indicate a worrisome trend of distraught young men, struggling with unresolved, or ongoing, personal issues.

That’s no surprise, says Piita Irniq, a former Nunavut politician, commissioner and advocate for Inuit culture as a tool to help Inuit heal from colonial-era trauma.

“We’ve gone from igloos to microwaves in less than 50 years,” Irniq said.

“These incidents we see… it’s happening among young men much more than young women,” he said. “And what we need to do is reach out to these men.

“It’s more and more important for the governments in these regions to help these Inuit men get in touch with their cultural identity.”

In his work with communities across the Inuit Nunangat, Irniq uses traditional culture to help Inuit reclaim their sense of identity, something he believes helps to ground people. That in turn helps to build self-esteem, he says, something necessary for the healing process.

When Irniq goes into a community or a southern prison to work with Inuit groups, he tries to impart what he calls “traditional tools,” skills that can help men contribute to their families, their local community.

“I’d like to see men making small qamutiit for babies and children to be pulled in, so we can take back the respect men always had in the community,” he says, as an example.

But to coordinate those activities and offer support to men in need, communities need to have organized leadership and facilitators in the form of local associations or committees, Irniq said.

And there are success stories in the North to build on. Since the mid-2000s, the Unaaq men’s association in Inukjuak has grown a reputation for strong community leadership and support, a model to which many other communities in the region look for inspiration.

“We got started for the same reasons we still see now — men committing suicide, dealing with addictions, violence and traumas,” said Tommy Palliser, one of Unaaq’s founding members. “But we’ve had a lot of impact.”

The group does that by coordinating workshops lead by elders, discussion forums and traditional skills training.

Unaaq is an open group but its services tend to target young men between the ages of 15 and 35.

“Most of the incidents we see are young men of that age,” Palliser said. “Unfortunately, a lot are on welfare, they have limited education and they just don’t have anything to do.”

Inukjuak, a community of 1,500 on Nunavik’s Hudson coast, has faced a number of dramatic and tragic losses in recent years involving young men.

Just last month, a local man was shot dead by police after he tried to enter the local Kativik Regional Police Force station with a knife in the middle of the night.

In March, a 24-year-old armed man held family members hostage for two days before turning the gun on himself.

These are “delicate” situations to respond to, Palliser said, and Unaaq always makes an effort to reach out to men and families in difficulty.

But the group’s purpose is more preventative, he points out.

“Our main goal is to keep these guys busy and out of trouble,” he said.

As a long-term goal, Unaaq would like to help bring more technical training opportunities to the community, Palliser said, in order to help men secure jobs — meaningful and permanent work of which they can be proud.

“We see lots of these guys working as janitors and driving water trucks, but it can be boring and repetitive,” he said. “A lot of men wish they had an education, but getting a high school diploma can be a challenge in itself.”

Palliser also thinks Unaaq would benefit from collaborating with other men’s groups across the North, much the way Pauktuutit Inuit Women of Canada acts as an umbrella organization for regional Inuit women’s groups.

Inuit men would also have common experiences with other Aboriginal groups in Canada, he added.

On the other side of Hudson Bay, in Rankin Inlet, Noel Kaludjak helps coordinate a men’s support network in the Kivalliq region called Angutiit Makgiangninga, which translates as Men Rising Up.

“It means we’re getting up from abuse, anger, alcohol — all the pain from our hearts,” explained Kaludjak, who adds that he’s been on his own healing journey for about a decade now.

“The door is open to anyone,” he said. “When we sit together, we understand what the other one is going through. When there’s a woman present, it’s harder to speak up about our feelings.”

The network is informal, but hopes to eventually establish core groups in each community, Kaludjak said.

Since Angutiit Makgiangninga launched in 2009, Kaludjak estimates the group has offered support to anywhere from 20 to 30 men in each of the Kivalliq’s seven communities.

“When violent incidents like [the recent standoffs] happen, the person is probably not coming from a secure place,” he said. “Unstable families create unstable children.

“We’re trying to create better men who can connect with their spouses and raise solid children.”