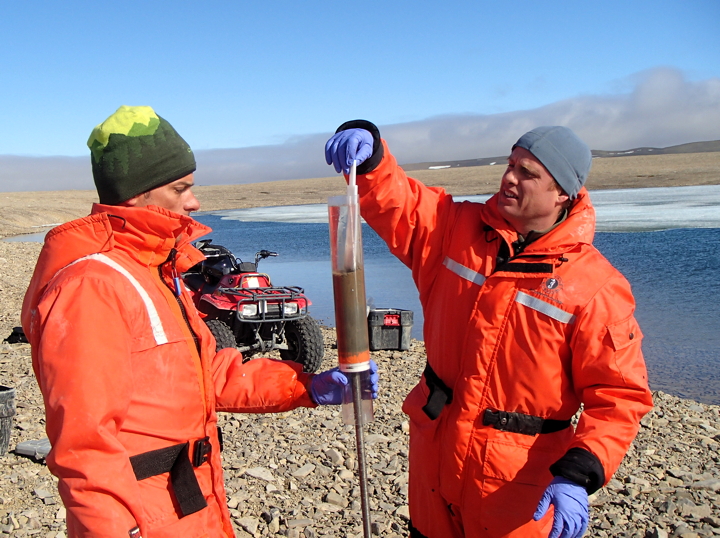 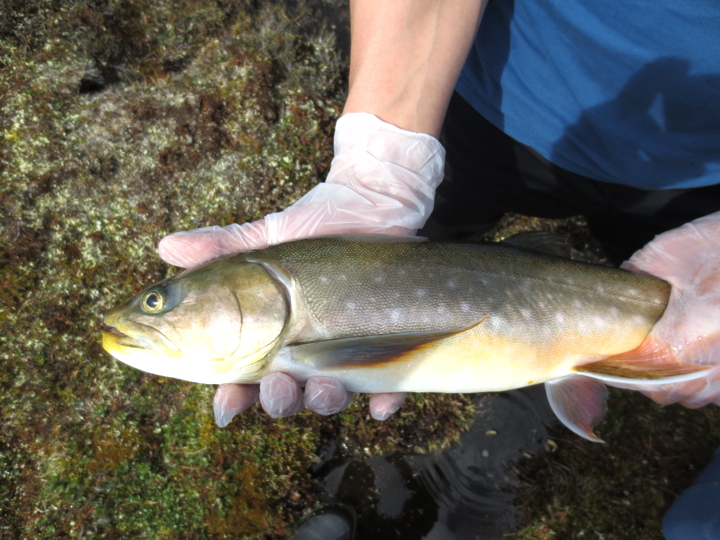 A lake-dwelling Arctic char captured in July 2013 from Iqalugaajuruluit Lake near Iqaluit for measurement of mercury. (PHOTO COURTESY JOHN CHETELAT)

Sometimes those changes are harder to see, but they still matter.

An Environment Canada scientist based out of the National Wildlife Research Centre at Carleton University in Ottawa is studying how climate change is impacting how much toxic mercury is getting into the food chain from pollution that settles in Arctic lakes.

In high enough doses, mercury poisoning can lead to damaged hearing, speech and vision, and even death.

John Chételat presented some preliminary findings at Carleton recently, which are based on a three-year study that began in 2012 of three lakes at different latitudes — near Kuujjuaraapik, Iqaluit and Resolute Bay.

Pollution that contains heavy metals, including mercury, has been blowing over the top of the world and settling on the tundra since the Industrial Revolution some 200 years ago.

Some heavy metals are naturally occurring as well, and leach into the water from surrounding soils and rocks.

As summers get longer and warmer in the Arctic, lakes here get more productive, which means there’s more algae for the tiny invertebrates to eat and thus more food for the fish. That means more fish.

That’s how mercury travels through the food chain into fish which could potentially be eaten by animals and people.

“Mercury is a contaminant of concern because it can bio-magnify to high levels in wildlife,” said Chételat, who is leading the project with Murray Richardson from Carleton’s geography and environmental studies department.

Bio-magnification means as you go higher up the food chain, greater concentrations of mercury can accumulate in muscles and organ tissue.

“It can be a risk for wildlife and human health so there’s a broad motivation for addressing that.”

Results are preliminary at this point, but one thing he’s noted is that fish in Arctic lakes grow much more slowly and don’t get as big as their southern counterparts.

“That likely affects their levels of metals,” Chételat said. “Slow growing char that live year round in lakes, in the central and high Arctic, have very slow growth rates, so this is probably one fact that results in higher levels of mercury in their muscle tissue.”

But he cautions it’s still early to be drawing too many conclusions.

“The role of climate change in influencing the distribution of metals in the environment is really complex. The science isn’t there at this point,” he said.

“We’re trying to develop that science to more fully assess the changes that are going on.”

Reports on all the findings will be disseminated in the three communities nearest the lakes where the team conducted their summer field studies in 2012, 2013 and 2014.

When the team was near Iqaluit this past summer, they employed local guides and researchers including students from the Environmental Technology Program at Nunavut Arctic College.

“The student we worked with in Iqaluit, he had a very good knowledge of the local area and was really helpful in taking us to the lakes and having fished some of these lakes, knowing the local environmental characteristics,” Chételat said. “So it was a win-win for us.”

So much interest was generated in his research that Chételat has already begun a two-year local monitoring program in Kuujjuaraapik to gauge the levels of heavy metals in country food harvested nearby. He’s hoping to get more funding to extend the program beyond its 2015 end date.

Chételat is part of a team of researchers from four different Canadian universities and Environment Canada who are studying all aspects of heavy metals in Arctic lakes as part of the Northern Contaminants Program.

Together they are examining how mercury gets transported through the watershed, how much is available in the water and sediment to be taken up by organic matter and then how much is bio-accumulating in the food chain.

The Northern Contaminants Program, funded through Aboriginal Affairs and Northern Development Canada, was created in 1991 to monitor levels of contaminants in wildlife to ensure country foods, eaten by northern peoples, were not harmful to human health.

If Chételat’s research shows that fish have elevated levels of mercury that could be harmful if eaten, those results would be passed on to the contaminants program and to Health Canada so they could issue public advisories.

According to background notes sent by the federal environment department, “more than 95 per cent of mercury resulting from human activity that is deposited in Canada, including in the Arctic, comes from other countries.”

But Chételat’s minister — and Nunavut’s MP — was on the hot seat last week about Canada’s commitment to reducing another kind of industrial pollution: greenhouse gas emissions.

NDP critics accused Leona Aglukkaq, the federal environment minister, of not doing enough to meet emission reduction targets in light of a Nov. 12 deal between China and the United States to reduce their production of greenhouse gases in an effort to address climate change impacts.

Despite her own departmental staff admitting that Canada will not meet its greenhouse gas emission target of 17 per cent below 2005 levels by the year 2020, Aglukkaq defended her government saying she was “very proud” of its environmental record.

She also wrote a letter to Nunatsiaq News clarifying her position on the subject.