“It’s very empowering for the community” 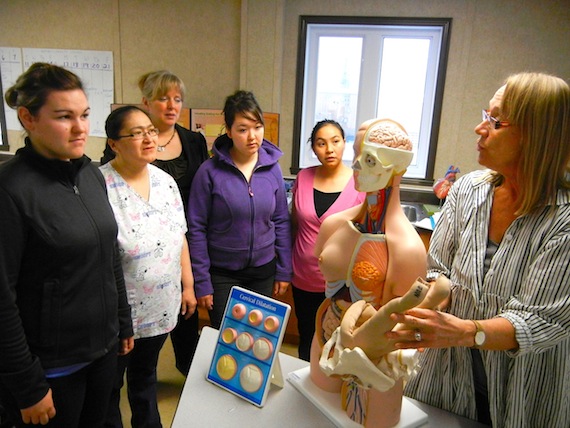 CAMBRIDGE BAY — Aimo Nauyuk, 26, of Pangnirtung, travelled across Nunavut last year to Cambridge Bay — a place she’d never been before — to realize a dream.

Nauyuk, whose two children were born 13 months apart in Iqaluit, suffered from being separated from her family and friends while she was waiting to deliver at the Qikiqtani General Hospital.

Now, Nauyuk’s common-law spouse and children are with her in the Kitikmeot region, so she can make a difference for her community as a midwife.

Nauyuk said she’s proud to follow in the path of her late grandmother, who was also a midwife.

When Nauyuk applied for that program, she thought it would be offered in Iqaluit — but even when she learned the program would be given 2,000 kilometres away from Pangnirtung, that didn’t deter her.

The NAC course, she said, is “challenging and interesting” — and putting her on her way to a career she hopes more Nunavut women will consider.

That view is echoed by Hilary Irwin of Rankin Inlet, who, at 19, is the youngest in the class.

Irwin travelled to Cambridge Bay for the first time a week after graduating from high school — and, as she recalls it now, her year spent at the college foundations course was hard, mainly due to homesickness.

But now she’s embraced her studies and Cambridge Bay.

During the summer Irwin, who’s not Inuit but speaks Inuktitut fluently and describes herself as “seriously northerly,” worked last summer at Rankin Inlet’s birthing centre, assisting as an interpreter and helper at 15 births.

Her inspiration in pursuing midwifery? Soon-to-be-retiring Rankin Inlet midwife Christine Siksik who gave Irwin the determination to see “women staying in their own community when they’re giving birth.”

Bernice Lyall, 40, also dreams that pregnant women in Cambridge Bay will one day deliver their babies at the local health centre, with help from local midwives.

Lyall, mother to three children, says midwifery isn’t just about “catching the baby,” but part of empowering women “to stand on their own two feet and be a voice for themselves.”

Since 2010, women have been able to deliver at the Cambridge Bay’s Kitikmeot health centre.

But its midwives are all brought in on rotations from the South — something the NAC’s program hopes to change.

And most women who could deliver in Cambridge Bay still choose to go to Yellowknife to deliver, so, to date, only 16 babies have been born at the Kitikmeot birthing centre.

For the past two weeks, aspiring midwives in the maternal care and midwifery program have spent their classtime focusing on women’s issues with instructor Elizabeth Hadlari, looking at the question “what is the image of a well woman?”

Last week, one of the classes’ activities included delivering a researched presentation on subjects such as substance abuse, sexually transmitted infections, depression and chronic pelvic pain.

Healther Omilgoitok, 45, a Cambridge Bay mother of three, spoke about poverty and its link to maternal and child health.

Omilgoitok cited statistics that show Nunavut has the highest proportion of people on social assistance in Canada, along with levels of infant mortality that are two and half times more than the national rate.

Shelly O’Gorman, 22, also of Cambridge Bay and a mother of two, talked about ectopic pregnancies, where the fetus starts to develop outside a women’s uterus, and its link to repeated STIs. “Practice safe sex” was among her messages.

As part of their course work, Nauyuk, Irwin, Lyall, Omilgoitok and O’Gorman will continue to learn how to evaluate information and conduct their own research.

That will be important, said instructor Hadlari, as they continue up NAC’s “laddered” program where courses for a Maternity Care Worker certificate are considered to be the first year towards a three-year diploma in midwifery, which in turn can eventually be part of a degree in that field.

Midwifery graduates will be able to meet standards set by the Canadian Midwifery Regulatory Committee and provide care that is “culturally appropriate for and acceptable to the residents of Nunavut,” NAC information on the course says.

Maternity care workers will partner with registered midwives and other care providers to assist in community wellness programs, providing a range of prenatal and postnatal resources and family support.

Hadlari predicts the program “will have a significant impact on women” in Cambridge Bay and Nunavut.

“I don’t think many people realize the importance of what happens when women don’t have to leave the community to give birth — it’s very empowering for the community as a whole to have the birth of children taking place in the community,” she said.

The course flows out on Nunavut’s Maternal and Newborn health strategy for 2009-2014 in which Nunavut’s health minister Tagak Curley promised “we seek to bring birth back to our communities.”