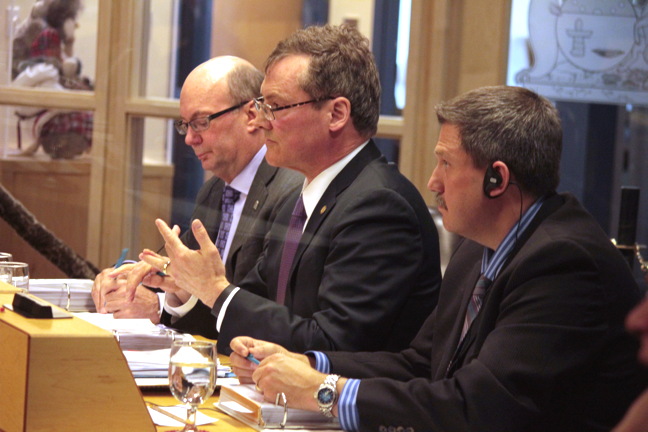 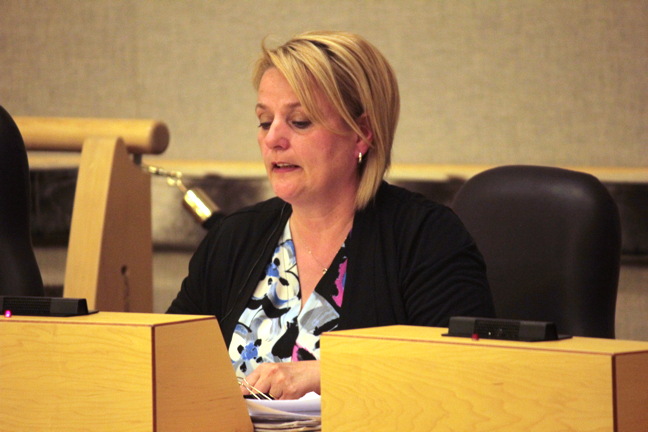 The debate over whether Nunavut is better served now that the human resources department has been folded into two other departments finally came to a head at the legislature June 2, with a lengthy grilling of Finance Minister Keith Peterson by Nunavut MLAs.

Peterson, who is also minister responsible for human resources, appeared before the legislature’s committee of the whole to weather an onslaught of questions about Inuit hiring, training and promotion, and allegations that the Government of Nunavut is an unhealthy workplace.

Iqaluit-Niagunnguu MLA Pat Angnakak, who spoke out about issues of GN workplace bullying and harassment in a series of articles published by Nunatsiaq News, led the charge June 2, asking Peterson why the human resources department was dissolved and how Nunavummiut have benefited, or suffered, as a result.

She was unwavering in her inquisition, but said she Is committed to a sincere discussion.

“It is important that we not make unfair and unfounded generalizations or accusations about public servants during these proceedings,” Angnakak said.

It’s easy to paint every demanding manager a bully and every staffer who raises a concern a troublemaker, she said.

The point is not to examine anecdotes, “but rather we should be examining whether or not the government’s current systems and structure are working well to foster workplace wellness and resolving workplace conflict.”

Peterson, a veteran minister accustomed to political scrutiny, repeatedly held his ground during questioning from Angnakak and others.

He admitted there may be kinks in the transition and that it might take a few years to work them out but he claimed no knowledge of major workplace problems.

He said the decision to scrap the HR department and split its duties between the Department of Finance — labour relations and staff recruitment — and the Department of Executive and Intergovernmental Affairs — Inuit hiring and training — was made over a two-year period with extensive consultation and input from MLAs and cabinet members.

There were no backroom deals, he said; no secret agenda.

And, Peterson stressed, it came in the wake of a highly publicized report from the Auditor General of Canada which noted numerous problems and deficiencies with how the old human resources department functioned.

“The Auditor General of Canada… said she had grave concerns with the structure of the human resources department and she says in that report that changes have to be made, we weren’t achieving our objectives, so the Government of Nunavut looked at her words very seriously,” Peterson said.

Peterson seemed to have an answer for everything. And when he didn’t — which was rare — he deferred to two staffers who joined him on the hot seat: the finance department’s deputy minister Chris D’Arcy and Jeff Chown, Nunavut’s comptroller-general.

He began with an explanation of how the department was dissolved in 2013 and then he introduced documents MLAs would be discussing: the GN’s human resource strategy; the Public Service Code of Values and Ethics, which came into effect in 2013; and, the last two public service annual reports.

Angnakak responded to Peterson’s introduction by saying she “personally, and deeply” respects the work of the GN’s public service.

She wasted no time in getting to the point: why dissolve the HR department when a government-commissioned report by Ken Lovely advised against doing so?

Peterson said the Lovely report was only one element considered among many political opinions and reports — including that of then-Auditor General Sheila Fraser.

“Can the minister tell us what specific problems have resulted from separating the management of the two government human resource functions into two separate departments,” Angnakak asked.

“She seems to be aware of problems,” Peterson replied. “I am not aware of any problems.”

She asked him the same question again.

“At the time I recall telling the listening public and officials in the government that we’re not going to be looking at overnight success,” he said. “So you’re going to hear hiccups and issues but to me they’re not problems that can’t be overcome.”

“Perhaps the minister can give us specific challenges that they’ve had to overcome,” she asked.

“She’s asking me for a list of challenges but we’re not aware of any challenges,” he said.

Angnakak wasn’t the only MLA hunting for answers June 2.

Joanasie wondered why the Inuit priority hiring policy would be implemented by finance when the executive department was supposed to be in charge of employment and training.

He also pointed out that the hiring policy expired two years ago and might need revising considering Inuit still comprise less than 50 per cent of the GN workforce.

The GN’s 2016-2019 government-wide Inuit Employment Plan indicates a target of 51 per cent Inuit employment by March 31, 2017. This means the GN must hire 17 beneficiaries in the next nine months, Joanasie said, not a simple task.

Peterson agreed hiring 17 new Inuit employees would be a challenge.

Okalik said many jurisdictions have a standalone human resources department and that perhaps Nunavut should consider going back to that scenario.

Peterson pointed out that Okalik was part of cabinet when the decision to split the department unfolded.

“He indicated I supported this as a cabinet member,” Okalik said. “I had my concerns and I didn’t agree all the time.”

Shooyook, the legislature’s eldest member, was concerned about Inuit getting government jobs.

He said Inuit have always learned by doing and he wondered whether the GN’s hiring practice allowed for the hiring of Inuit who might not have academic credentials but who have traditional leadership and organizational skills transferrable to the public service.

Peterson said the GN makes every effort to hire Inuit whenever possible through co-op programs and that once hired, apprenticeship and training opportunities can help Inuit get promoted up the ladder.

“Please pay close attention to these issues,” said Shooyook. “They should be put into these positions because they are already capable. As a government, please take note.”

MLAs were planning to continue their discussion of human resource issues today, June 3, during committee of the whole.

In an earlier version of this story, MLA David Joanasie quoted slightly different beneficiary versus non-beneficiary employment figures during Committee of the Whole meetings in Nunavut’s legislature. He later corrected those figures. We apologize for the misinformation.