Kugluktuk MLA wins after only one ballot, defeats Okalik, Quassa 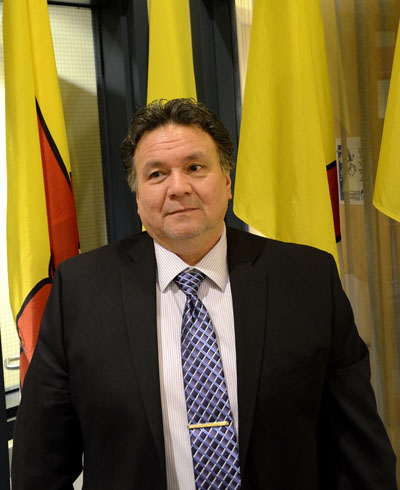 Kugluktuk MLA Peter Taptuna will serve as the next premier of Nunavut. “For sure we’re going to be doing our best to make sure we benefit and assist Nunavummiut in the best possible way with good integrity, good ethics,” Taptuna told reporters. (PHOTO BY DAVID MURPHY)

Taptuna, who earlier won his Kugluktuk seat by acclamation, took the premier’s job after only one ballot, which means he gained immediate support from a majority of the 21 MLAs at the leadership forum, with no need for a run-off vote.

The ballots, which MLAs cast in a secret vote, were destroyed afterwards and MLAs then voted to make their choice unanimous.

“For sure we’re going to be doing our best to make sure we benefit and assist Nunavummiut in the best possible way with good integrity, good ethics,” Taptuna told the assembly after being announced as the third MLA in the history of the territory to serve as premier of Nunavut since its creation in 1999.

And at the start of the session, MLAs picked Amittuq MLA George Qulaut as speaker.

MLAs will take their oaths of office at 9:30 a.m. Nov. 19. The new speaker, premier and cabinet will be confirmed in formal motions at 1:30 p.m. the same day.

Later that afternoon, two big reports from Michael Ferguson, the Auditor General of Canada will land on their desks: a report on education in Nunavut and a report on the safety of schools and child care facilities in Nunavut.

Ronnie Campbell, an assistant auditor general, will attend the tabling of those documents.

Taptuna stressed the link between education and economic development throughout the leadership forum.

Each of the three nominated members received 20 minutes at the beginning of the forum to make their pitches to MLAs.

Taptuna began his speech in English but spoke also in Inuinnaqtun for a few minutes.

“It is proven that investing in education in the early years of a child’s development is the single, most effective way to reduce poverty,” he said.

Taptuna used up 16 minutes of his 20-minute allotted time to touch on critical housing needs, “countless investments” and social challenges like suicide prevention.

But Taptuna’s theme of education carried into the lengthy question period, when members grilled the three nominees.

Education is what got him elected as premier, he said.

“All the candidates indicated that education is key,” he said. “We all put a good effort into making sure that it stays on top of the priority list.”

That effort means that social promotion — the practice of allowing students to continue from year to year, regardless of what they have learned or have not learned — ends immediately.

And Taptuna hopes to see better qualified high school graduates over the next four years.

“Our graduates are not able to read and write. We’ve got to change that if we want to see a better future for Nunavut,” Taptuna said.

Taptuna said resource development is on its way, too.

“In our young territory, economic development has to come from mining industry, exploration and mining,” Taptuna said.

Lobbying the federal government for funding is also an important future task for Taptuna.

“We have to be realistic to our approach to Ottawa. There’s a lot of issues that need to be addressed and some of them are impossible to do because of our limited budget,” he said.

“That’s why we have to be strategic in our approach to Ottawa, especially when it comes to funding infrastructure and housing.”

“He’s the top choice that [members] want. With Peter, who was the deputy premier for the past five years, I think he will be able to continue the good work that was started,” Aariak told Nunatsiaq News

“I have complete confidence that he will do a great job,” she said.

Quassa said he isn’t disappointed that he lost out to Taptuna.

“I have no regrets whatsoever, because I believe this is the right choice. And although I had my name in the hat, I always knew that the next premier is the one we’re going to be electing,” Quassa told Nunatsiaq News.

“We elected as a whole. And I took part in that election, so I’m very satisfied,” he said.

For Okalik, this is his second consecutive failed attempt at winning the premiership, a job he held between 1999 and 2008.

In 2008, when he served as MLA for the old riding of Iqaluit West, Okalik, along with Rankin Inlet North MLA Tagak Curley, was defeated by Eva Aariak, the MLA for Iqaluit East.

“I would like to congratulate outgoing Premier Eva Aariak for her many accomplishments as premier and wish her well in all future endeavours.”