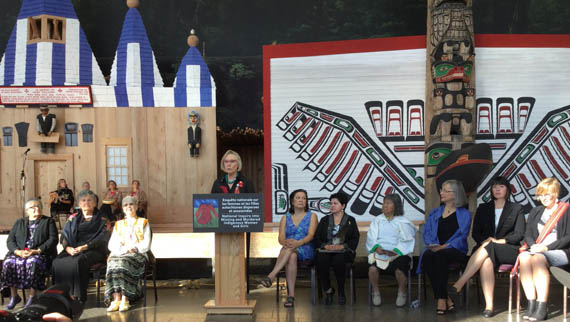 The National Inquiry into Missing and Murdered Indigenous Women says it will reschedule an upcoming hearing in Nunavut, set to be held the week of Dec. 11 in Rankin Inlet.

Organizers, families and survivors in the Kivalliq community received calls from inquiry staff on Thursday.

“After reaching out to family members to discuss the best way to move forward it was determined that the space originally planned to hold the hearings will not be able to accommodate the privacy and safety of those families wanting to share their truths,” said the inquiry’s chief commissioner, Marion Buller, in a statement posted to the inquiry website.

Buller apologized to the families planning to attend the December hearing.

MacKenzie initiated the invitation to the inquiry to visit Rankin Inlet as a way to honour her late aunt, Betsy Kalaserk, who died in 2003.

“We’ve been mentally and emotionally preparing ourselves for this hearing for months,” she said.

MacKenzie said there were 15 people registered to share their stories during the week-long hearings, including relatives flying in from Nova Scotia and Arviat.

The hearing was set to be held in Rankin Inlet’s community hall, a venue inquiry staff would have had a chance to see when they visited the community in August. MacKenzie believes the commission could still find a more appropriate location in the community of 2,850.

In fact, Buller said staff have found “an improved location” while they work to find a new hearing date that accommodates local families.

Families have been told the hearing could be rescheduled in February 2018, though it’s unclear if commissioners will still decide to host the hearing in Rankin Inlet.

MacKenzie said organizers are considering moving the event to Iqaluit or Montreal.

But a change of venue would only “revictimize survivors,” she said.

“It’s a very close-knit community that’s really endorsed this and wanted it to happen here,” she said.

The December hearing would have marked the inquiry’s first visit to Nunavut, and its first to an Inuit region.

The change in schedule comes the same week as one of the lawyers on the inquiry’s Inuit working group resigned. Joseph Murdoch-Flowers had been working for the commission since last spring.

The inquiry has faced a series of set-backs from the get-go, including bureaucratic and IT-related delays, a number of other staff resignations and calls for commissioners to step down and “reset” the entire process.

The inquiry just reached the half-way point of its two-year mandate and recently put out an interim report.

The national inquiry has said that to date, more than 900 survivors have stepped forward to share their stories.