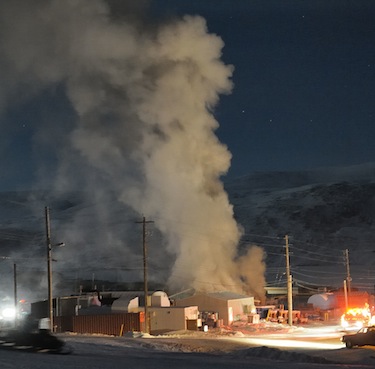 A power plant fire which began in the early morning hours of April 2 plunged the community of Pangnirtung into cold and darkness until rotating power could be restored on April 3 and full power by April 5. (FILE PHOTO)

Pangnirtung’s 29-day state of emergency, resulting from a power plant fire and community-wide power outage, is now officially over.

Nunavut Emergency Management made the announcement in a May 1 news release, saying the Qulliq Energy Corp. has “successfully implemented a mid-term power solution in Pangnirtung to provide full, stable power to all residences and buildings.”

By early morning, fire crews had extinguished the fire while stand-alone generators and mechanical staff were flown to that south Baffin community and the hamlet declared a state of emergency.

Soon after, emergency management devised a plan to fly large generators to the community to stabilize power there.

The Government of Nunavut news release commended the Hamlet of Pangnirtung, “on its excellent response to this community emergency. Their efforts in coordinating the local emergency response ensured that residents were kept safe and warm during power outages, and informed throughout the local state of emergency.”

It’s unclear at this point when Pangnirtung will get a new power plant.

Finance Minister Keith Peterson, speaking as the minister responsible for the QEC, announced March 19 that the GN plans to upgrade 17 power plants in hamlets throughout the territory.

The GN asked for, and received in the latest federal budget, an increase to the territorial borrowing cap in order to finance these upgrades.