“We have to understand each other and co-exist” 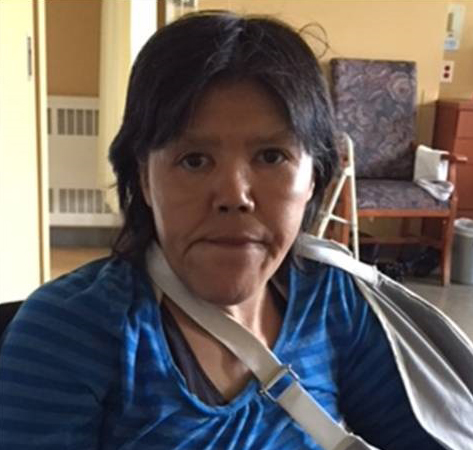 Montreal police are under scrutiny for the way officers released an injured Nunavik woman, Mina Aculiak, from custody late on July 27. The interaction is now the subject of a formal complaint to Quebec’s police ethics commission. (FILE PHOTO)

The release of an injured Inuk woman from Montreal police’s custody has prompted at least one official complaint and a series of sensitivity training sessions that will be delivered to the force this fall.

Mina Aculiak of Umiujaq was recovering in a Montreal rehabilitation centre from serious injuries last month when she was picked up outside the facility on July 27 after having consumed alcohol.

The Service de police de la Ville de Montréal (SPVM) said they kept the 48-year-old woman in custody until she sobered up, and then released her around midnight with a bus ticket.

But Aculiak did not return to the centre; she went missing, although police only issued a missing person’s notice five days later.

Aculiak was found by an off-duty police officer on Aug. 2. She has since returned home to Nunavik, while she awaits further surgery.

Maggie Putulik, the director of out-of-region services at the Nunavik Regional Board of Health and Social Services, said the incident shows an insensitivity and disconnect between police and Inuit, who can be vulnerable while away from their home region.

“I don’t know if it’s a common practice,” said Putulik, who also serves as director at the Ullivik patient residence in Montreal’s Dorval neighbourhood.

“But I disagree with the way they released a person with a catheter and a hospital bracelet on … an Indigenous woman who doesn’t speak English or French,” she said.

“To release a person that vulnerable with only a bus ticket in the middle of the night is really insensitive.”

Putulik said it then took police five days until they issued a missing person’s notice—days after Aculiak’s partner had reported her missing to police.

“We’re at a point where we all realize that was a lack of information within the SPVM (on the circumstances of Aculiak’s stay in Montreal.)

“We have to understand each other and co-exist. There has to be a better effort on the part of the SPVM to reach out to those organizations that work with Inuit,” Putulik said.

To that end, Putulik is teaming up with the Montreal Native Women’s Shelter and the city’s commissioner of Indigenous affairs, Marie-Ève Bordeleau, to develop and deliver sensitivity training to SPVM staff and officers starting this fall.

The training will focus on Inuit and Indigenous populations in the city, she said: who they are, where they come from and what different factors bring them to the city.

Police won’t comment on the July 27 incident because the SPVM’s interaction with Aculiak is now the focus of a complaint filed with the Commissaire à la déontologie policière, Quebec’s police ethics commissioner.

If the complaint is deemed worthy of further investigation, that may help explain what happened to Aculiak over the six-day period she went missing.

Between the night she was released, July 27, and the time she was found, Aug. 2, Aculiak has since told her partner and medical escort, Paul Tookalook, that she was actually detained by police on two other occasions.

Tookalook said it’s not clear why and where in the city she was detained.

But the SPVM denied that, saying Aculiak was only brought in once, on July 27.

Tookalook said he’s in contact with Montreal police to determine which officers interacted with Aculiak over that period.