“Unfortunately, most communities, even church communities, are not willing to engage the sort of project that we’re doing here” 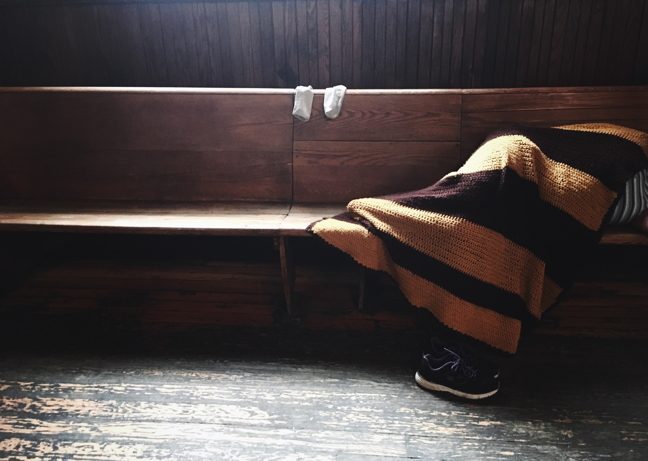 An Inuk woman sleeps on a pew at Open Door during the early afternoon hours when 30 others are also scattered about napping. Nearly half the benches are filled with people sleeping after a night on the streets. (PHOTO BY COURTNEY EDGAR)

MONTREAL—Every two weeks, Rynee, a 40-year-old Inuk woman, flies down to Montreal for cancer treatment. Since being diagnosed last August, she has had her left breast removed and comes down south regularly for a few days or a couple of weeks at a time.

“I was very weak before, but now I’m stronger,” she says, sitting in Cabot Square in downtown Montreal, a block away from the Open Door day shelter. Her hair is growing back slowly and she is glad to see her friends when she goes to the shelter.

“It is where most of my friends are,” Rynee said. If they didn’t have Open Door, she thinks they would probably all go hungry.

It is the only shelter in Montreal that welcomes people who struggle with addictions and might be intoxicated, according to David Chapman, the Open Door director.

But the shelter is facing a crisis.

Open Door has operated out of the St. Stephen’s Anglican Church in Westmount for the last 30 years, but after the church was sold, they were told they had to move out.

Chapman had spent months searching for new prospective locations in the neighbourhood and eventually found a church a few blocks away that was willing to consider renting to the shelter.

But city officials refused to let Open Door move to that location, He said the refusal came after a local television station ran a story citing the church’s address, and plans for the new shelter, before Chapman had been able to pitch it to the city on his own.

He said reporters asked potential neighbours their thoughts on the shelter’s new location and neighbours likely feared it would diminish their property values.

Regardless of fault, Chapman and Open Door are now back to square one.

St. Stephen’s Church gave them an extension on their current lease, allowing them to stay until Dec. 31 instead of July 31, so at least they have some more time to look.

“You need to find a landlord that is not only willing to rent to you, but is also socially-minded so that, in the longer term, the relationship can work out,” Chapman said.

The Open Door is unique in that they don’t turn anyone away. But that can be a sticking point for neighbours.

“You could have significant mental illness, just a hair away from being admitted into a hospital–screaming and hollering and making a real scene—and we’ll let you in,” Chapman said.

Drug addiction, vulnerable mental states and serious illnesses are common among Open Door clients. Compassion and patience are needed for addictions, Chapman said, because they are, in almost all the cases he sees, a means to cope with childhood trauma.

“It takes a community that is socially-minded or altruistically-oriented that understands that, for those that are the most marginalized, it is going to require some very intentional patience,” Chapman said.

The Open Door requires two things for a new location, he said: a “respectful space,” with windows and light.

“We are working with a group of people who have enough obstacles and trauma in their life that the last thing they need is to be in a place that feels like a prison,” Chapman said.

And the second requirement is that the building be situated within walking distance of Cabot Square, which is where the majority of those who use the shelter’s services spend their days and nights.

Chapman said that’s because almost all of the people they work with get around on foot. They need a new location to be within an eight-block radius around Cabot Square.

His efforts to keep Open Door alive and accessible have been challenging but what frustrates him most is the “not-in-my-backyard” mentality. He keeps finding people who “agree that it is a good thing, but are not willing to make the personal sacrifices to make it work.”

“While the city of Westmount and the Anglican Diocese of Montreal have been willing to work with us to a certain extent, neither could be considered to be significant advocates for the homeless,” Chapman said.

And there is increasing political pressure for “those who are seen as undesirables” to be moved out of the area, Chapman said he believes. He perceives a “thinly guised racism” in the intentional gentrification of Westmount—the power of wealthy interest and with it, a sense of entitlement.

“If you’re spending a lot of money, you think you don’t have to look at homeless Inuit people,” he said.

Theodora Samiotis, a Westmount city councillor, said that many residents donate to the Open Door and that the city itself has been making yearly contributions because it believes in its mission.

“Council recently also approved funds to help the Open Door with the transition to a new location because we understand that news of the church’s sale came as a surprise to them, Samiotis said.

She also pointed out that the Open Door is on the southwest corner of Atwater Avenue and the other two corners are situated in the City of Montreal.

“Regardless of its location, it serves a much broader community and it will take all levels of government to support the activities of Open Door if we are to tackle the issue of Inuit homelessness,” Samiotis said.