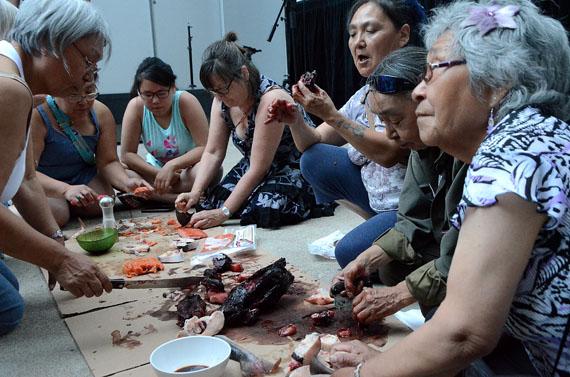 Women cut up seal and Arctic char at the FOFA Gallery Courtyard Aug. 4 in Montreal, as part of the Tillutarniit summer screening series. (PHOTO BY DAVID MURPHY) 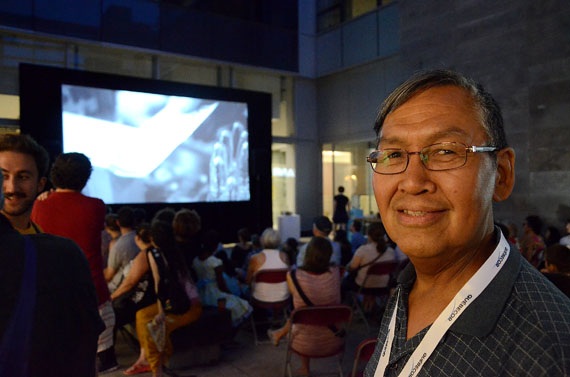 Filmmaker Jobie Weetaluktuk watches his own film, Inukshop, screened at the FOFA Gallery Courtyard Aug. 4 in Montreal as part of the Tillutarniit summer screening series. (PHOTO BY DAVID MURPHY) 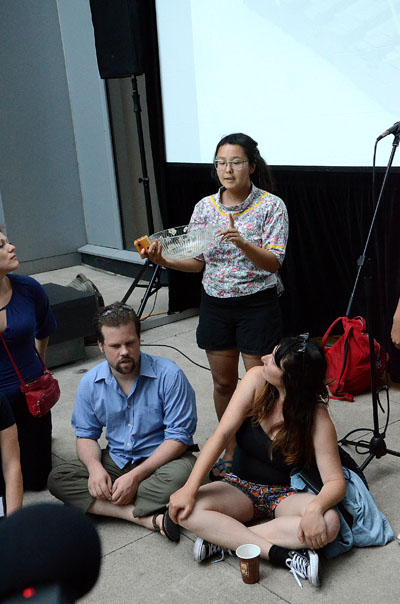 Isabella Weetaluktuk teaches an Inuit game to about a dozen participants after the feast at the FOFA Gallery Courtyard Aug. 4 in Montreal, part of the Tillutarniit summer screening series. (PHOTO BY DAVID MURPHY)

If you live in the Arctic, it’s a pretty normal scene.

But it’s anything but normal when the scene is dropped amidst towering skyscrapers and accompanied by the sound of city traffic on the busiest street in downtown Montreal.

“I miss it,” said Mary Paningajak of Ivujivik, on Nunavik’s Hudson Strait, after feasting on Arctic char shipped fresh from Iqaluit Enterprises.

“When I came here to Montreal, first I could not eat food from Montreal. My stomach feels closed, but when I eat country food it’s more open,” she said.

“Open” is the operative word there. It’s how co-curator Stephen Puskas wants all people to feel — in one way or another — at the three-day free film festival which he helped organize.

The festival, called Tillutarniit — “pulses” in English — kicked off Aug. 4 with country food, Inuit games, a performance by singer Beatrice Deer and screenings of films by Inuit filmmakers such as Jobie Weetaluktuk and Zacharias Kunuk.

“All the Inuit events I’ve been to before in [Montreal], it’s either all Inuit who go to the event or all non-Inuit that go the event,” Puskas said.

“I think this might be a first of its kind where you see Inuit and non-Inuit together sitting around and eating Inuit food, playing an Inuit game, listening to Beatrice Deer sing,” he said.

A goal of the event: to educate non-Inuit about Inuit culture and “pull the curtain back on the type of representation that many Canadians see of Inuit,” Puskas said.

“It’s very two-dimensional. And I hope this kind of adds a third dimension to people’s perception of Inuit,” he said.

Puskas and co-curator Isabella Weetaluktuk are showing nine films at the Faculty of Fine Arts, or FOFA, gallery courtyard at Concordia University, an outdoor venue on busy Ste-Catherine St. W., where anyone can wander in and watch films on a projector.

The first night consistently attracted about 50 people inside the courtyard throughout the evening, although many dozens more stopped by with shopping bags in one hand and smart phones in the other, trying to capture the unusual event on their cameras.

Puskas said Tillutarniit is also a response to the controversial film, Of the North by Dominic Gagnon.

And cultural centres throughout Montreal and Canada should be addressing issues with events like Tillutarniit, Dorner said.

“Centres just have to start doing it. Taking the risk. Reaching out to members of these various communities. Making important contacts and continuing to build these relationships, and keep doing it,” Dorner said.

In planning the event, Dorner said she was “a little embarrassed” about how little she knew about Inuit culture, even though she holds a bachelor’s degree and a master’s degree.

“I think this has been a learning experience on how much work there is to do,” Dorner said.

“More events like this should be happening, so that my own children will grow up knowing these very basic things that we all should know about the cultures that have been here long before us.”