“We have a historic lack of infrastructure” 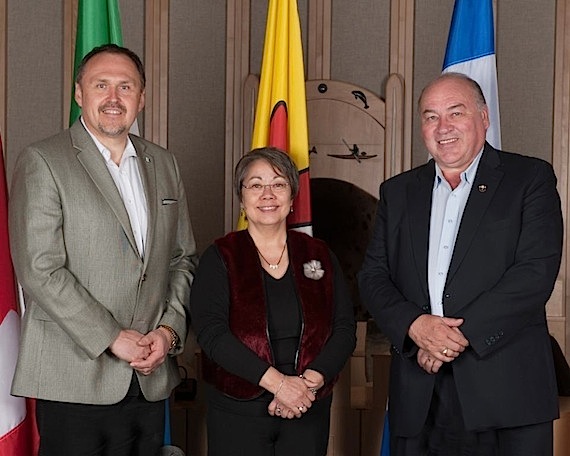 At the wrap-up of 2012 Northern Premiers’ Forum in Iqaluit on June 27, Canada’s three northern premiers, Bob McLeod of the Northwest Territories, Darrell Pasloski of Yukon and Eva Aariak of Nunavut, said they made some progress on how to tackle economic development and the high cost of living in the North.

And the common solution to those challenges is more infrastructure, they said.

“Building new infrastructure in the North, of course, brings all benefits to the North,” said Aariak during a midday news conference.

The three premiers are calling for a “base-funding plus per capita” formula to deal with northern infrastructure deficit, particularly for Nunavut. That extra amount would compensate for the territories’ smaller populations, greater needs and higher costs.

“We have a historic lack of infrastructure in Nunavut. We don’t have roads connecting to anywhere, we don’t have ports,” said Aariak.

“And of course housing has a huge impact on all areas that we are challenged with, in terms of communities well-being, [and] education,” she added. “For infrastructure — lack of housing has an affect on many aspects of the kind of issues that we deal with, social-economic issues. Our small population, high building costs, and limited access to capital should be recognized in a new federal commitment to Canada’s infrastructure.”

The two other premiers also said that to reduce the high cost of living, more infrastructure development is the answer.

“When we looked at ways to reduce the cost of living it all boiled down to infrastructure — either roads or airports or other means of transportation,” said McLeod.

The premiers also talked about food security and high cost of foods, and “urged the federal government to monitor [the] Nutrition North Canada Program for its effectiveness and [to] ensure it achieves its goals,” by producing more and better information for communities.

“There is no simple answer to food insecurity,” said Aariak, who praised the creation of a food coalition in Nunavut. “We talk of the high cost of living, and lack of transportation, and there’s a lot of issues that connect to driving the cost of food and the cost of doing business in the North.”

The premiers also said they are looking forward to talking about more support for a secure, sustainable, reliable and competitively-priced supply of energy at the Council of the Federation summer meeting of premiers.

“With energy we have aging diesel power in Nunavut, which we rely 100-per-cent on. Developing alternative methods of providing more energy efficient infrastructure is very important,” said Aariak.

The next Northern Premiers’ Forum is to be held in Yukon in 2013.