“I wanted to give them something fresh, but also in our language” 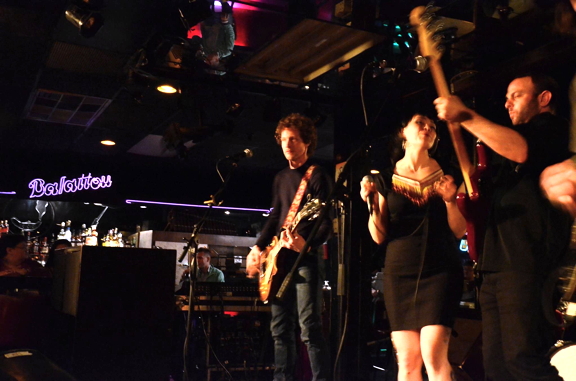 The Beatrice Deer Band released their latest album, Fox, in Montreal April 12. The album features Inuktitut and English lyrics, a little throat-singing, and even a song by Deer’s auntie Louisa Kulula. (PHOTO BY DAVID MURPHY)

“Yeah… wow,” Deer said with a giggle, sitting on a stool backstage at Club Balattou in Montreal.

“We gotta work on making those albums closer together,” she says, laughing again.

The Beatrice Deer Band officially released their new EP, called Fox, April 12 in Montreal in front of about 40 fans and friends.

It’s long overdue, says co-producer and bassist Mike Felber, joining Deer backstage after ending their show with covers of “Zombie” by The Cranberries and “Eye Of The Tiger” by Survivor.

“She moved from Quaqtaq and it had been four or five years and she’s in Montreal meeting new musicians and nothing was coming out of it,” Felber said.

“And there was even some funding there and it was kind of embarrassing,” Felber said. Deer giggles, again.

But Deer, now 32, has nothing to be embarrassed about. The EP, entitled Fox is “urban Inuit” music, she says, and she thinks it’s her best album yet.

Fox, however, is a new sound for Deer. It’s less folky and more indie-rock, with throat singing and traditional Inuit songs mixed in between.

Most songs are in Inuktitut but there are some English lyrics as well.

“I wanted the EP to be all in Inuktitut, but I also didn’t want to exclude [the] English speaking audience,” Deer said.

“But I also wanted to expose our language because most of our audience is Inuit. So I wanted to give them something fresh, but also in our language.”

Deer is particularly proud of the album because of how it was produced: she was more hands-on this time.

“And I was not that experienced in recording so I just went along with whatever they were doing.”

Co-producers Felber and Johnny Griffin, who’s the primary songwriter, challenged Deer vocally, “Compared to the other albums, where I wasn’t really challenged,” she said.

She’s talking about sustaining some long, high-pitched notes like in the chorus of title track, “Fox.”

Deer actually opened the April 12 show in Montreal with the up-tempo, melodic, “Fox” which tells a story from Inuit legend.

“I took vocal lessons for this EP, which was a great learning experience. So I learnt a lot of stuff throughout this project.”

The album also includes softer, darker songs such as “Relocation,” some throat singing on “Competition” and a half-minute piece, “Pisiq” which features the voice of her auntie, Louisa Kulula.

“We didn’t plan that. I just asked [Kulula] to sing old songs that her mother used to sing, my grandmother, [who] I never knew,” Deer said.

“I just asked her to sing and I recorded her on my iPhone on a car ride home. During the EP production I wanted to just put it in.”

Listen closely and you can hear the hum of tires on pavement in the background. If you didn’t know, you might think it was a river.

The next goal for the band is sharing the album so that “everyone hears it in the world,” Felber said.

But they’re really hoping to reach the North, Felber clarifies.

“It’s orientated to the northern people. It’s kind of herded to that crowd,” he said.

Which is the way it should be, Felber said, because Deer is a success story through which others might learn, and be inspired.

“Things can get pretty dark up there sometimes,” he said.

“And it would be nice for the kids up there to see what Beatrice has done and, you know, see her as a positive role model and spread a good message to the people of the North.”

The Beatrice Deer Band plays next in Gatineau April 29 for Nunavut Sivuniksavut’s 30th anniversary conference at the Hilton Lac-Leamy.

In the meantime, you can buy the Beatrice Deer Band’s Fox on iTunes here.