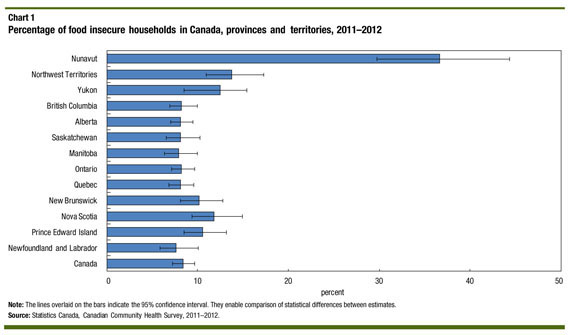 This Statistics Canada graph shows the percentage of food insecurity by province and territory, with Nunavut leading the pack.

A new report from Statistics Canada confirms what most Nunavummiut already know: that the territory has the highest rate of food insecurity in the country.

The report, Food Insecurity in Canada, released March 25, found more than one-third of Nunavut households don’t get enough to eat.

In 2011-12, an estimated 36.7 per cent of Nunavummiut struggled with food insecurity, the StatsCan report said — more than four times the Canadian average of 8.3 per cent.

The report defines food insecurity as when one or more members of the same household do not have access to a variety or quantity of food that they need, due to lack of money.

It found that households that relied on government benefits as their main source of income were over three times more likely to experience food insecurity than households where members received salaries or wages.

About four in 10 residents of Nunavut are on social assistance, the highest proportion in the country.

The report also found that food insecurity was more common among households with children, then in those without.

Further to that, single parent households reported the highest rate of food insecurity.

The federal New Democrats used the new figures to point blame at the Conservative government for its failure to “fix” Nutrition North Canada, the federal program that subsidizes food in northern and isolated communities.

“These statistics demonstrate the Conservatives’ utter failure to ensure that northerners have secure access to nutritious and affordable food,” said NDP MP Dennis Bevington (Northwest Territories) in a March 25 release.

“Even as elders are rooting through garbage to find food, the Conservatives have refused to acknowledge how ineffectual their Nutrition North program has been.”

The NDP cited the 2014 report of the Auditor General, which found that Nutrition North wasn’t effectively passing on its air freight subsidy to consumers.

But the office of Aboriginal Affairs and Northern Development minister Bernard Valcourt shot back March 26, saying the program has been successful in increasing the volume of perishable nutritious food shipped to northern communities by about 25 per cent since it was implemented.

“To continue progress, our government committed significant funds in 2014-2015 to increase program food subsidy budget, and we are at this time implementing a new ongoing five per cent compound annual escalator,” said an email from Valcourt’s office to Nunatsiaq News.

“This means that for this year and next year, we will be providing over $133 million in total direct retailer subsidies, to ensure continued access to healthy perishable foods for Northerners.”

The issue of food insecurity in Nunavut has grabbed national headlines in recent months, with the creation of an organization called Helping our Northern Neighbours.

The network of southern groups works to send food and care packages to northern families in need.