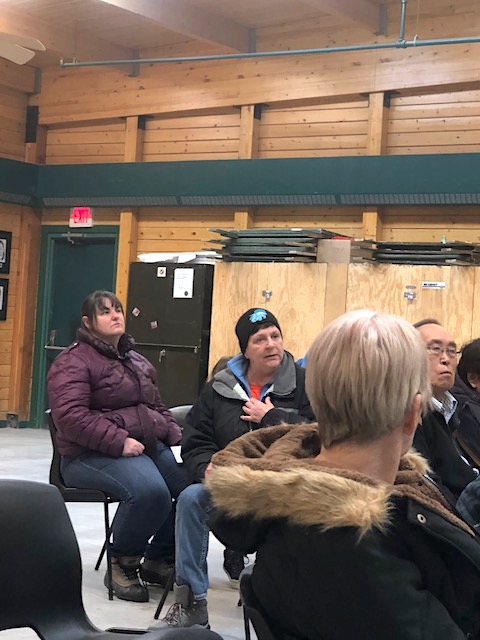 Disgruntled MTS customers in Cambridge Bay share stories about how the barge cancellation has affected them during an Oct. 3 meeting organized by the Kitikmeot Chamber of Commerce. (PHOTO BY JANE GEORGE)

CAMBRIDGE BAY—Due to the cancellation of the last resupply barge into Kugluktuk and Cambridge Bay, next year looks bleaker than ever for many in western Nunavut who got together last night to see what their options are for seeking recourse.

In addition to essential supplies, such as the chlorine needed for municipal water treatment in Cambridge Bay, 33 vehicles, including new municipal garbage and sewage trucks, were slated to arrive in this community of about 1,700 people on Oct. 2.

Suzanne Maniyogina, mother of four, who recently returned to full-time work, was waiting for her pick-up truck on the cancelled barge: “I cried when I found out it wasn’t coming,” she said.

Maniyogina and the others at the Wednesday night meeting organized by the Kitikmeot Chamber of Commerce learned only on Monday that a Marine Transportation Services barge, the last resupply barge of the year expected in Cambridge Bay, had cancelled its stop there as well as in Kugluktuk, to the west.

Maniyogina, who has a bad back, said she couldn’t imagine how she would manage everything this winter, along with the added stress of payments for the vehicle she won’t be able to drive.

At the meeting, she and the other disappointed MTS customers finally got a chance to read a statement, issued by the Government of the Northwest Territories late Wednesday afternoon, about why the MTS barge cancelled its stops in Kugluktuk and Cambridge Bay, on Oct. 2 and Oct. 4.

“The Government of the Northwest Territories recognizes the importance of barge resupply to communities along the Arctic coast and understands that the uncertainty of the past few days has caused concern and frustration for communities and residents of the region.

“Unfortunately, severe ice conditions have resulted in the cancellation of MTS’s end-of-season cargo deliveries, but we are committed to ensuring the delivery of essential cargo and are reviewing options for all remaining cargo,” said Wally Schumann, the transportation minister.

This was MTS’s second season of barging, after the GNWT purchased the assets of Northern Transportation Co. Ltd. for $7.5 million in 2016. NTCL had also left Cambridge Bay in the lurch in 2014, when it never brought a large barge in.

The GNWT release blamed this year’s cancellations on “impassable ice conditions” and said ice conditions in the Amundsen Gulf were reported to be “the most challenging in over 30 years.”

It said plans were being made to deliver essential goods, such as petroleum products, to communities by aircraft as soon as possible.

But that wasn’t reassuring at all to those who came to meetings organized by the chamber in Cambridge Bay and Kugluktuk.

Cambridge Bay businessman Stuart Rostant, who chaired the meeting in Cambridge Bay’s community hall, said they had organized a meeting so affected individuals, businesses and governments can take a unified stand against MTS.

“We believe there is strength in numbers,” he said. “Each of us has something to lose.”

The chamber has already consulted a lawyer, who offered to look at all client contracts with MTS for no cost, Rostant said.

Although Nunavut has no class action legislation, the lawyer suggested there could be another way to claim some compensation as a group.

During the meeting’s discussions, one woman said she doesn’t want her truck full of groceries staying in Tuktoyaktuk, where the barge is now located.

She said she didn’t want her name used in this story because she worried that it could work against her in her dealings with MTS.

But she described how she had contacted MTS in September, when she started to worry about the barge’s late re-scheduled arrival date, and was told she could take her truck off the barge and get it driven to the MTS office in Hay River, at her own cost.

If she ended up having to do that, she said she’d drive it right to Montreal where a competing eastern shipping company could bring in up next August or September.

For now, she said she’s worried about where her vehicle will be stored and what will happen to her groceries if they freeze: “who will pay to clean up her frozen pickles when they burst inside her truck?” she asked.

Similar complaints came from MTS customers in Kugluktuk where a small business owner said via telephone link that, without all the lumber their construction company needs, they may not survive.

Several suggested that MTS should get a Hercules to fly in everything that is on the barge—and that Ottawa should step in to make sure they don’t lose their livelihoods due to the barge’s cancellation and the lack of road connections to their communities.

“I’d like to know who made the decision to cancel our barge,” said one man. “We’re too far away and don’t count.”

Adding to the anger over the cancelled barge was information that an MTS tugboat, the Nunakput, which had been at the dock in Cambridge Bay, left yesterday to assist with an MTS fuel delivery to a nearby gold mine project operated by TMAC Resources Ltd.

Sabina Gold and Silver Corp., with its Back River gold mine project under construction on the mainland south of Cambridge Bay, said it had not receive a sealift delivery since mid-September.

“Our last planned voyage with MTS from Tuktoyaktuk has recently been cancelled by MTS due to ice conditions,” said Matthew Pickard, Sabina’s vice-president for environment and sustainability.

“The cancelled barges were to move 460,000 litres of fuel, various equipment and supplies to our marine laydown area. The first two voyages (MTS and NEAS) were received successfully earlier this year.”

The chamber of commerce now has a special page on its website for those affected by the barge cancellation.

Cambridge Bay MLA Jeannie Ehaloak told Nunatsiaq News that she had participated in a conference call with the chamber.

“At this time the GN is monitoring the situation,” she said.