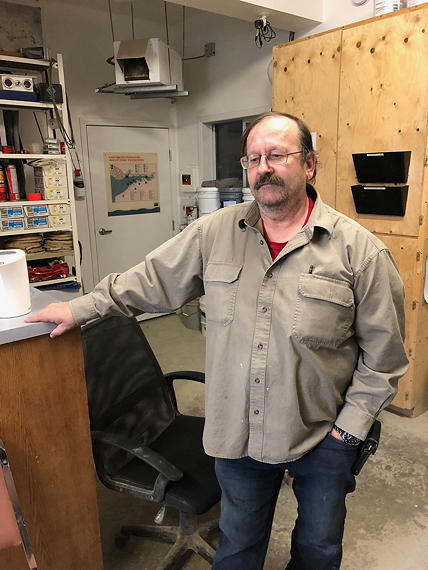 Peter Laube of Kalvik Enterprises Ltd. in Cambridge Bay says the cancellation of the last barge into the community of about 1,700 will cost him and many others a lot of money. (PHOTO BY JANE GEORGE)

CAMBRIDGE BAY—Heavy sea ice on the Arctic coast has prevented a barge from delivering supplies to Cambridge Bay and Kugluktuk in western Nunavut.

Fuel, construction supplies, heavy equipment and vehicles are among the supplies now stranded on a Marine Transportation Services barge in Tuktoyaktuk, N.W.T.

Peter Laube of Kalvik Enterprises Ltd., a construction company, called the cancellation a “disgrace” and a “pain.”

Because of the cancellation, Laube now lacks supplies to finish a duplex under construction, and he won’t be able to put a roof on the house where his staff are supposed to live.

Along with other projects Kalvik committed to, he’s looking at a big inconvenience and expenses that he said will add up to roughly $350,000.

“I’ll pay 10 times more to bring in everything in by air,” Laube said.

Bruce Peterson of Inuksuk Enterprises Ltd., a general contracting company, had ordered two trucks, as well as a big order of pop for his new corner store, among other supplies and equipment.

Now he’ll have to fly in the pop at an extra cost of $1.25 can, a cost which he said he’ll end up absorbing.

“It throws a wrench into your plans,” Peterson said. “This is going to affect a lot of people in Cambridge Bay. A lot of people now driving ATVs were waiting for their vehicles.”

Now they’ll be waiting a year, making payments on trucks they can’t drive, while still others will take out mortgages to cover projects they’ve committed to but can’t start, he said.

“If this happened anywhere else in Canada, there would be an uproar,” Peterson said.

The Hamlet of Cambridge Bay will also miss out on essential supplies, said SAO Marla Limousin, including a new garbage truck, a new sewage truck and three pick-up trucks.

“The most important and critical is the chlorine for the water treatment,” Limousin said.

The barge is operated by the Government of the Northwest Territories’ Marine Transportation Services, or MTS.

The GNWT describes the service as providing “reliable barging services and deck cargo transportation from the Port of Hay River to NWT communities on the Mackenzie River and Arctic Ocean supply route.”

The barge out of Tuktoyaktuk was supposed to arrive today in Cambridge Bay and on Oct. 4 in Kugluktuk.

This was MTS’s second season of barging, after the N.W.T. government purchased the assets of Northern Transportation Co. Ltd. for $7.5 million in 2016 “to protect the petroleum product supply chain for N.W.T. communities along the Mackenzie River and Arctic coast.”

But western Nunavut experienced an unusually cold September, with temperatures of 2.6 degrees below the norm for the month in Cambridge Bay and 3.7 degrees in Kugluktuk, leading to more sea ice.

Laube faced a similar cancellation in 2014, when the NTCL barge didn’t make it in to Cambridge Bay due to ice conditions.

Now, Laube said he would like to see a class action suit brought against MTS.

Peterson said that he expects in the future, many in western Nunavut will likely purchase what they need from suppliers in Montreal, rather than from Yellowknife or Edmonton, and ship those supplies from the east.

He said he doesn’t understand why MTS waited so long to move its barge.

“They should have come here a long time ago and gotten us out of the way,” said Peterson. “We trusted MTS to deliver.”

“Oct. 2 was obviously too late. We all knew it but they kept telling us they would make it on time. ”

In response to the cancellation, the Kitikmeot Chamber of Commerce decided to organize a meeting Wednesday night for everyone in the region affected by the barge cancellation.

The N.W.T.’s Department of Infrastructure was expected to issue a statement later Oct. 2, but that did not take place.