Muskox on the increase at Nunavut’s Devon Island: new survey 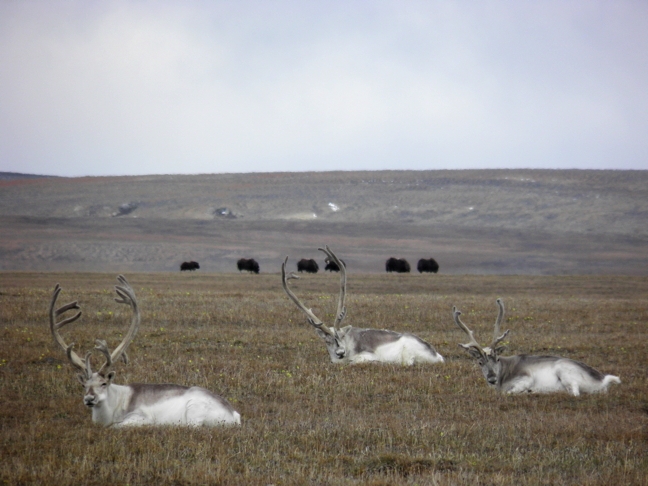 There are a lot of muskoxen on Devon Island in Nunavut’s High Arctic — so many that the Government of Nunavut’s environment department will likely recommend that the Nunavut Wildlife Management Board increase the harvesting quota there.

With the help of local spotters from Resolute and Grise Fiord, Morgan Anderson, a GN wildlife biologist, conducted a nine-day aerial “abundance and distribution” survey of Devon Island in late March.

What the survey found was kind of surprising. After counting 837 muskoxen, they are estimating about 2,000 live on the island.

The previous estimate for Devon Island, from a 2008 survey, was only 513 muskoxen.

“It was pretty exciting,” Anderson said April 19. “I mean even if you go just by the number we actually saw, that’s a record high.

“So we’ll definitely be sitting down with the communities and talking about that. I believe the TAH [total allowable harvest] on Devon is 15, which we can definitely increase.”

But spotters weren’t just looking for muskox on Devon Island — located south of Ellesmere Island and east of the community of Resolute Bay.

To help gather information for an upcoming management plan, the surveyors were also on the lookout for Peary caribou.

The Peary caribou, which roam the High Arctic islands, are the smallest North American caribou, with an estimated population of about 13,000 adults, according to the Committee on the Status of Endangered Wildlife in Canada, or COSEWIC.

But Anderson said wildlife experts don’t have definitive information about the Peary caribou range and migratory patterns because they tend to live in small groups across a huge, expanse of territory, partly due to scarce food sources.

Some animals stick to certain islands, she said, but some migrate around the Arctic islands.

“Grise Fiord and Resolute both have a really good understanding of what the caribou do in the areas they harvest from but there’s a lot of other areas that are too remote for any of us to have a reliable idea of what’s going on there.”

COSEWIC at one point designated the Peary caribou as “endangered” because of a massive die-off in the mid-1990s related to ice events which made it hard for the caribou to feed.

But that status was upgraded in 2015 to “threatened,” meaning that Peary caribou are considered more sustainable now, but remain in need of a recovery strategy and management plan.

A draft of that recovery strategy, which Ottawa and the territories have been working on since 2011, is expected to be ready for final consultations this spring and a release in 2017.

But until then, High Arctic hunters and trappers organizations have been careful to limit their caribou harvesting.

Right now, there are no quotas on Peary caribou harvesting in Nunavut and only beneficiaries can hunt them.

Both the Resolute Bay and Grise Fiord HTOs have been careful over the years to place voluntary restrictions and moratoriums in areas where caribou are scarce, Anderson said.

“It’s been very instructive to a lot of communities who are now struggling with this issue, like on Baffin, to have examples where communities have essentially lead conservation efforts,” Anderson said.

“It’s really great working with Resolute and Grise,” she added. “They are very on the ball and very concerned about their wildlife.”

Anderson said the team flew nine days straight over Devon Island with no weather delays — which is rare.

They invited youth, elders and other hunters to come on board as spotters. Those spotters, while airborne, offered anecdotes about where they’d hunted in the past or seen certain animals over the years — providing a crucial context for understanding local wildlife.

Having completed the Devon Island survey, Anderson was switching gears last week to polar bears: a multi-year population estimate for the Gulf of Boothia and M’Clintock Channel area.

Rather than collar bears like they used to — a practice rarely done in Nunavut anymore because it’s considered too invasive and potentially harmful — biologists intend to gather information through biopsy darting.

This will see them shooting the polar bears from helicopters with a dart that captures a small bit of the polar bears’ DNA for analysis. The dart then immediately falls out and can be collected.

The Beverly herd, located in the Kivalliq, “have shown a potential declining trend,” says a project description submitted to the Nunavut Impact Review Board.