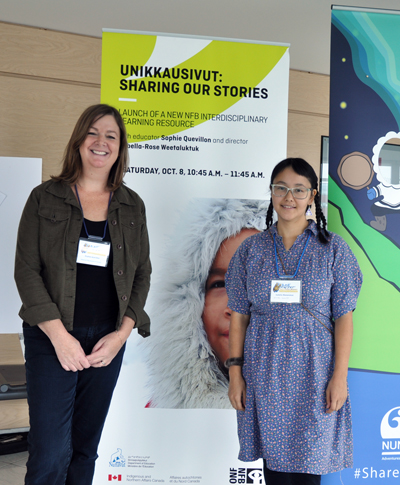 The deep shades of brown and blue illustrate the Inuit legend Lumaajuuq, or The Boy and the Loon, a dark tale about the dangers of revenge.

Arnaquq-Baril’s animation is one of 24 films produced and packaged by the National Film Board as part of Unikkausivut: Sharing Our Stories, a DVD collection of some of the best short works from its archives of documentaries and animated films.

The NFB wanted to ensure the footage and films were made available to the public when they released the collection in 2011.

Now, the NFB wants to do more to promote its Inuit-focused collection and along with that, Inuit filmmaking, the NFB told a session at the Inuit studies conference in St. John’s Oct. 8.

The original footage the NFB gathered in Inuit regions, starting in the 1940s, was used to create ethnographic films, but those stories were captured through the lens of southerners, and largely consumed by a southern audience.

“Today we’re proud to say that there’s a new generation of Inuit filmmakers at the NFB who continue to tackle difficult issues,” said Sophie Quevillon, who works on educational programs for the NFB.

“They are telling authentic Inuit stories.”

Now the NFB is looking for more Inuit input, Quevillon said—ambassadors to promote its work and to help develop education content.

That could mean writing a class lesson based on certain films, or giving classroom-based training on how to incorporate the film collection into the curriculum, Quevillon said.

Isabella-Rose Weetaluktuk is one of those storytellers; the 24-year-old Nunavik-born, Montreal-based filmmaker has waded through thousands of hours of the NFB’s historical footage to piece together a film called Three Thousand.

She showed another short film called Lucky Upinnaqursitik at INuit Blanche, which happened in conjunction with the conference Oct.8, a short film made up of animation, painting, personal photographs and archival material.

“It’s a really good education guide,” Weetaluktuk said of the NFB’s Arctic footage. “It brings us alive again and keeps our culture strong.”

Weetaluktuk said she is enamoured by so much of the footage, particularly a set of short and animated films produced in Cape Dorset in 1973, made by local artists showing images of the community, hunting, airplanes and local legends.

What’s changed in more recent decades is the perspective and the audience, she said.

“When you make a film, you think: who are you making the film for?” Weetaluktuk told the conference Oct. 8.

“Now we choose to make these films just for Inuit, which means you can exclude certain information and just get right to the point. I think that can make them more meaningful.”

In a separate session at the conference, a group of Inuit photographers and filmmakers discussed the challenges they face in their work.

Iqaluit filmmaker Alethea Arnaquq-Baril notes that, although Inuit-made films may only have recently started to be recognized, there have been Inuit capturing scenes through photography and film since the camera first came North.

“We’ve been making this art for a long time, we just haven’t had the recognition,” she told the conference session. “I’m really happy to see my fellow Inuit artists telling it like it is.”

The southern lens is ever present, Arnaquq-Baril acknowledged. She said she recalls one agency suggesting she produce a reality television series on alcoholism in the North—a suggestion she was quick to decline.

Instead, Arnaquq-Baril tries to address stereotypes in her work.

You can write to the NFB at s.quevillon@nfb.ca.