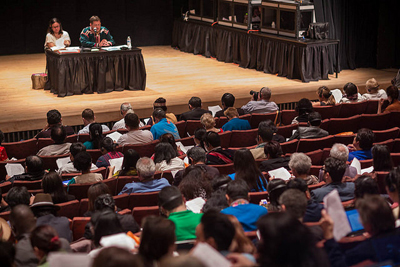 Delegates at a preparatory meeting at the UN’s World Conference on Indigenous Peoples in New York City Sept. 22. (UN PHOTO)

Canada’s national Inuit organization says it’s concerned about Ottawa’s interpretation of a section of the outcome document passed at this week’s World Conference on Indigenous Peoples.

In that document, Inuit and Aboriginal delegates from around the world reaffirmed support for the United Nations Declaration on the Rights of Indigenous Peoples, or UNDRIP, at the New York City gathering Sept. 23, including the right to free, prior and informed consent.

But Canada objected to paragraphs in the document asserting that principle — that indigenous peoples must give free, prior and informed consent to any development that could potentially impact their lands.

“Free, prior and informed consent… could be interpreted as providing a veto to Aboriginal groups and in that regard, cannot be reconciled with Canadian law, as it exists,” said Canada’s Sept. 22 statement.

“Inuit celebrated the government of Canada’s support for the declaration after it was announced in the Speech from the Throne in 2010,” said ITK president Terry Audla in a Sept. 25 release.

“But we are deeply concerned by Canada’s statement this week in response to the outcome document, in particular the government’s interpretation that free, prior and informed consent cannot be reconciled with Canadian law.”

Audla pointed out that the five constitutionally protected land claims agreements which Canadian Inuit have negotiated with the Crown require the active participation of Inuit on issues that impact those regions.

“The government’s statement this week contradicts its own confidence in 2010 that Canada can interpret the principles expressed in the declaration in a manner that is consistent with its Constitution and legal framework,” Audla added.

ITK’s sentiments echo those of a number of other indigenous organizations such as the Inuit Circumpolar Council and the Assembly of First Nations, both of whom accused Canada of undermining indigenous rights.

The Canadian government kept a low profile at the conference and was not represented by either the prime minister or a cabinet minister.

In a Sept. 25 statement sent to Nunatsiaq News, the office of Aboriginal Affairs and Northern Development Minister Bernard Valcourt pointed to the federal government’s “constitutionally-entrenched framework that ensures the consultation and accommodations as appropriate, of Aboriginal interests.”

“Since 2006 our government has passed unprecedented reforms that give Aboriginal peoples access to the same basic rights that other Canadians have long enjoyed,” read the statement.

“We have recently announced specific actions to ensure that positive and productive relations with Aboriginal communities continue, giving women living on reserves the same matrimonial rights as all Canadians, providing First Nations with drinking water standards comparable to those off-reserve and investments for on-reserve housing.”

In situations where there is no land claim or treaty, Ottawa it is still obliged to respect the principal of Aboriginal title.

The Supreme Court of Canada reaffirmed that in the Tsilhqot’in decision, released in June.

Even in cases where land claims have been signed and Aboriginal partners have surrendered title to large chunks of land — as is the case with the Nunavut Land Claims Agreement — some lawyers argue the Tsilhqot’in ruling still compels the Crown to negotiate for consent.