“We saw there were some updates that could be made” 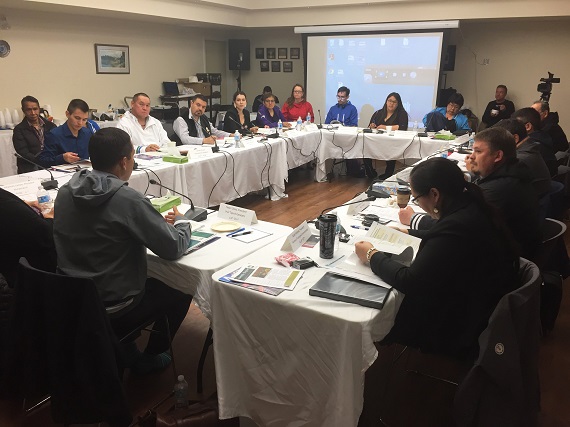 ITK board members meet in Inuvik on Aug. 15, where they decided to strike a committee later this year to review the organization’s election bylaws and procedures. (PHOTO COURTESY OF ITK)

Inuit Tapiriit Kanatami will strike a committee later this year to review the organization’s election bylaws and procedures, delegates at its August meeting decided.

The national Inuit organization just held its annual general meeting followed by the election of its president on Aug. 15 and Aug. 16 in Inuvik, Northwest Territories.

In the lead-up to that vote, in which ITK delegates re-elected Natan Obed as president, the organization said it fielded a number of questions about its election process.

The issues ranged from minor administration procedures—for instance, how candidates can pay their registration fees—to broader concerns over who gets to vote for ITK’s leader.

“One of the things that we found preparing for this election was that we saw there were some updates that could be made,” said ITK returning officer Will David during the Aug. 15 AGM.

Among the procedures that could use review, David said the organization should consider whether it wants its elections managed within the organization, as is currently the case, or to bring in third-party officers to oversee them.

David also raised questions about how candidates register to run in elections: who they should file those papers with, and if they should be given the option to pay the $200 registration fee by credit card.

On the election day, David said ITK’s election rules are unclear on whether or not candidates should have a question and answer period, which is the current practice.

Delegates voted to strike a working group to review election procedures, with the goal of bringing its recommendations to ITK’s 2019 AGM, which is scheduled to take place somewhere in Nunavut.

The committee, still to be formed, will be made up of at least one member from each of ITK’s four regional member organizations.

ITK’s election procedures and bylaws were last updated in 2012.

The recommendations that come from this process should align ITK election procedures with those of its sibling organization, Inuit Circumpolar Council-Canada, delegates said on Aug. 15.

The committee is also likely to revisit who is eligible to vote for ITK’s president. Currently, the leader is elected by a group of delegates appointed by each of its four regional Inuit member associations plus the president of ICC-Canada.

The 13 delegates voted by secret ballot on Aug. 16.