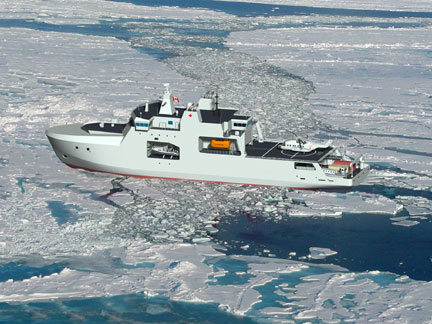 Here’s an artist’s rendition of what the future Arctic offshore patrol ship could look like. (FILE PHOTO)

The Harry DeWolf, the first of a fleet of Arctic patrol ships, will “better enable” the Navy to exercise sovereignty in Canadian waters, the news release said.

Harper made the announcement on board the Haida, a ship formerly commanded by DeWolf that now serves as a museum ship on the waterfront of Hamilton, Ont.

“Vice-Admiral DeWolf embodied the professional qualities and attributes that inspire all Royal Canadian Navy personnel to excel at sea and ashore today…It also underlines the increasing responsibilities that our Navy will take on to exercise Canadian sovereignty in the North,” Harper said.

Other Arctic patrol boats will also carry the names of “prominent Canadians who served with the highest distinction and conspicuous gallantry in the service of their country,” he said.

The procurement of six to eight ships for use in the Arctic and offshore was announced in 2007 with a budget of $3.1 billion, with an additional $4.3 billion for operations and maintenance over a projected 25-year lifespan.

That $3.1-billion project is now expected to cost $40 million more than anticipated.