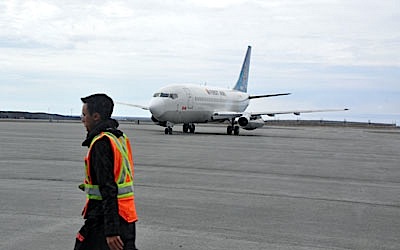 A new airline codeshare agreement for the Kivalliq region is promising smoother air travel, more direct flights between communities and to the south and even fresh produce in local stores.

First Air and Calm Air are preparing to launch their new codeshare agreement for the Kivalliq July 2, which will see Calm Air take over the operation of most of the region’s air travel, although both airlines remain carriers.

“We really think that at the end of the day, people will find this is an improved service.”

Kivalliq flyers have probably already noticed the difference, since First Air pulled its ATR flights from the region earlier this month.

The codeshare agreement, first announced this past May, is a departure from the merger that both First Air and Canadian North negotiated through 2014 before pulling the plug on the idea.

Codeshare is a practice in which a flight operated by one airline is jointly marketed as a flight by one or more other airlines.

That way, customers can purchase a seat through each airline but the flight is actually operated by only one of the cooperating airlines — called the “operating carrier.”

And via Rankin Inlet, those flights will be scheduled to connect with flights to and from Winnipeg on First Air’s new 737-400 combi series jets, operated by Calm Air though what the airlines call a “wet lease.”

Those will replace Calm Air’s Dornier 328s, which used to fly that route.

The 737 flights are scheduled to arrive in Rankin Inlet daily at 10:15 a.m., and return to Winnipeg at 11:35 a.m., allowing for morning connections from other Kivalliq communities.

The number of flights going to and from other Kivalliq communities won’t change much, but those flights will be more direct with Rankin Inlet, Bell said, with most connecting directly to the Kivalliq hub, rather than the “milk run” flights that used to stop along each Hudson Bay community.

Coral Harbour, Naujaat, Whale Cove and Chesterfield Inlet will see 12 flights a week, while Arviat and Baker will see 20.

Smoother connectivity is made possible through Calm Air’s working relationship with Sakku Investments Corp., which owns a newly-constructed hangar at the Rankin Inlet airport.

Calm Air now has use of the facility to park aircraft overnight and deal with mechanical issues, Bell said.

That makes Rankin Inlet the airline’s new Nunavut hub, replacing Churchill, Man., which was a regular refueling stop and where both airlines picked up food and other cargo shipped north by train.

Eliminating Churchill as its hub means that fresh food will arrive three days earlier in Kivalliq communities, Bell said — a huge advantage for all Nunavummiut.

And none of those changes will cost Nunavummiut passengers, he added; Calm Air has even written to the Kivalliq Inuit Association to confirm as much and quell local MLAs’ concerns.

“We have no intention of changing any fares as part of this agreement,” Bell said.

“We’ve got to do something to sustain airline operations in the North, and we think this is a very good agreement that will improve service,” he said.

First Air and Canadian North are in the process of “fine-tuning” their own codeshare agreement, focused on both the Baffin and Kitikmeot regions, which will be in place for August 1.

“We’re very confident that the travelling public hasn’t seen such attractive schedules, which we were only able to design because of the airlines’ cooperation,” van der Stege said.