QEC will install LED streetlights in four communities this year 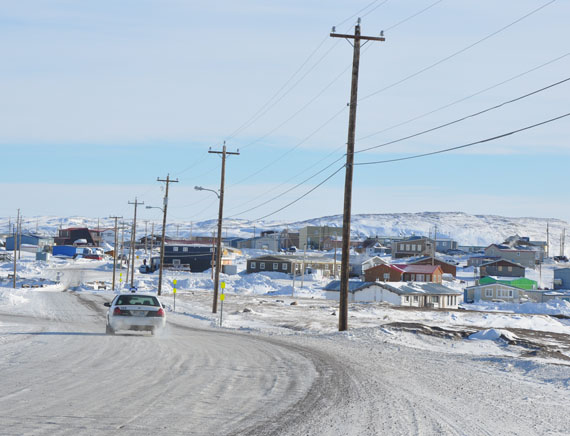 Qulliq Energy Corp. will finish installing LED street lighting this year throughout Iqaluit, as well as in three other Nunavut communities. (PHOTO BY SARAH ROGERS)

A Qulliq Energy Corp.-led pilot project will now see the light of day in four Nunavut communities, which are slated to get energy-efficient LED street lighting installed by the end of the year.

Iqaluit was the first Nunavut community to see light-emitting diode, or LED, street lighting when the QEC installed the modern lights from the Iqaluit airport to its Four Corners intersection in 2016.

Now, the energy corporation has announced plans to replace all of Iqaluit’s street lighting, along with lights in Rankin Inlet, Cambridge Bay and Kugluktuk, by the end of 2017.

“I am very pleased with QEC’s adoption of this environmentally friendly technology as not only will LEDs save money in the long-term, they also reduce our carbon footprint and improve road safety,” said Johnny Mike, Nunavut’s minister responsible for the QEC, in a March 22 release.

QEC first launched the LED street lighting pilot in 2015, which replaced conventional streets lights with 21 LED lights in Iqaluit to measure their performance.

The energy corporation found that, along with energy savings, the LED lights lasted up to five time longer than conventional lights, which translates into added savings in operational and maintenance costs.

The lights also cast a brighter glow on roadways which improves visibility for drivers during dark hours or bad weather.

The QEC estimated it would cost about $390,000 to replace all of Iqaluit’s street lighting.

The project has been funded in part by Indigenous and Northern Affairs Canada.

An earlier version of this story erroneously pegged the cost of streetlight replacement at $30,000.