“I wanted to get people talking about family structures and changes” 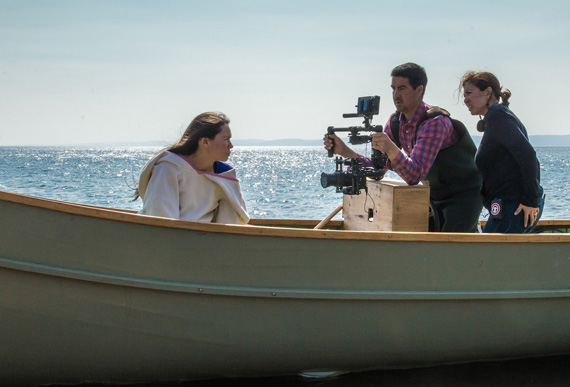 Iqaluit filmmaker Alethea Arnaquq-Baril, right, directs a scene in her new film Aviliaq with director of photography Qajaaq Ellsworth and lead actress Miali Buscemi. The film aims to revive dialogue on the Inuit practice of having multiple partners. (PHOTO COURTESY OF SHAWN INUKSUK)

A new film by Inuk documentarian Alethea Arnaquq-Baril aims to revive dialogue on the Inuit practice of having multiple spouses — a practice that ended abruptly with colonization, Arnaquq-Baril told Nunatsiaq News Aug. 19.

Aviliaq is a 10-minute romantic drama — Arnaquq-Baril’s first dramatic film — set in the eastern Arctic of the 1950s and shot just outside Iqaluit earlier this month.

“The term aviliaq was used for a partner or spouse, back when there was such a thing as plural marriages in Inuit culture,” she said.

The term refers to two partners of the same sex, Arnaquq-Baril said, sister-wife or brother-husband.

“The root of the word is kind of like saying your other half.”

Arnaquq-Baril said she doesn’t mean to imply these relationships were good or bad, but she’s curious about the cultural knowledge that made them possible.

“In general, I wanted to get people talking about family structures and changes that happened in that transitional period [1950s] that were not the choices of Inuit at the time,” she said.

“A lot of my work is based on raising questions around forced changes,” she said.

“Can we maybe discuss how they happened, and agree that they could’ve been handled a little more tactfully?”

The film will premiere at the imagineNATIVE film festival in Toronto, which gets underway Oct. 22.