Region reaches agreement with Quebec on new rent scale for 2017 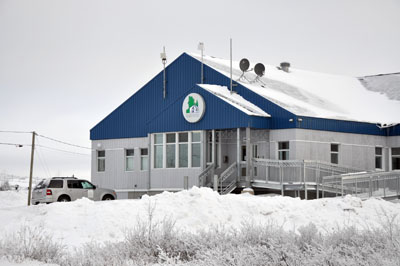 Social housing in Nunavik is managed through the Kativik Municipal Housing Bureau, whose head office is headquartered in Kuujjuaq. (PHOTO BY SARAH ROGERS)

KUUJJUAQ—Nunavik and Quebec officials have reached an agreement-in-principle on a revised rent scale for the region’s social housing tenants, the Kativik Regional Government told its councillors last week.

The following year, the Quebec government announced a partial freeze for low-income tenants while the parties negotiate a new rent scale.

But talks stalled when negotiators from Nunavik and Quebec reached an impasse earlier this year, prompting the province to name an independent negotiator to help the discussion move forward.

“With the new negotiator, we’ve made a lot of progress in the last couple of months,” Frédéric Gagné, the KRG’s assistant director, told regional councillors Dec.1.

“We now have an agreement on the table. We can’t provide details yet, but it meets the objective we had in the beginning, which is to alleviate the burden on families.”

The new agreement will reduce the annual rent increase, Gagné confirmed, and once in place, will be retroactive to July 2016.

“We hope to be able to have a permanent rent scale agreement for 2018,” he told councillors.

Gagné, who sits on a Nunavik-Quebec housing committee, said the two parties have met twice since the new negotiator, Daniel Gagnier, was named to the file.

“Things are moving quicker,” he noted. “We feel like there’s a better understanding of our position.”

But there remain a number of unresolved files in Nunavik’s housing portfolio including an unsigned agreement under Plan Nord for the provision of 60 already-constructed housing units which tenants are scheduled to move into next week.

Government lawyers in Quebec have been on strike since October, creating further delay.

Another Plan Nord initiative, a home ownership program run through the Société d’habitation du Québec which provides subsidies to Nunavimmiut who want to buy or build their own homes, has been closed temporarily while a new program is developed.

“We have to re-activate that program, we can’t be without it,” Gagné said. “People need to access private homes.”

At the federal level, the $50 million in housing for the region, announced in Ottawa’s spring budget, is dependent on Quebec agreeing to pay for the operation of that housing—an issue the two levels of government must work out independently of Nunavik, Gagné said.

And all this aside, Nunavik is still waiting to renew its tri-partite agreement with Ottawa and Quebec for the provision of housing—normally a three- to five-year long agreement, which has been put off and extended in recent years to allow time for more negotiations.

But the shorter-term agreements make it harder for construction crews to bring in materials and plan their buildings season, Gagné said.

“We want to come back to a longer-term agreement,” he told councillors.

“For the last few years, we’ve had so many different agreements. We need to come back to something more standard so we can plan.”

Regional councillors had their own list of housing concerns to bring to the table last week, including complaints over the poor design and construction of the region’s housing stock.

“Are we just going to keep getting the cheapest houses, the lowest quality when they just keep breaking down?” asked Puvirnituq councillor Muncy Novalinga. “I think we need to drop this and get better quality houses.”

Tasiujaq councillor Elene Berthe said she’d like to see the regional housing office, the Kativik Municipal Housing Bureau, expand its current seven-member board of directors to include representation from each of the region’s 14 communities.

“We’re grateful for our housing,” Berthe said. “But it would be good if the KMHB could give us more information.”