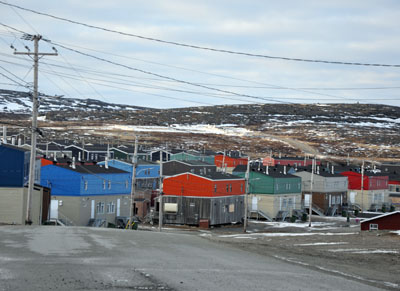 A revised scale will help reduce rents from 20 to up to 75 per cent for Nunavik’s social housing tenants, Makivik and the KRG said this week. (FILE PHOTO)

Almost three years after the Quebec government agreed to reconsider public housing rent for Nunavik’s social housing tenants, officials on both sides have decided on a revised rent scale for the region.

Under the new agreement, Nunavimmiut will see annual rent increases drop from eight per cent a year to six per cent, retroactive to July 1, 2016, and until July 1, 2019.

Though negotiations towards a new rent scale stalled in recent years, Nunavik’s leadership announced it had finally reached an agreement-in-principle last December.

A new draft by-law on Nunavik’s rent scale was published April 20 in the Official Gazette of Quebec and awaits approval from cabinet members.

The revised scale will help reduce rents from 20 to 75 per cent across the region, said Makivik Corp. President Jobie Tukkiapik.

“This will provide significant relief to the most critically affected families,” Tukkiapik said in a joint Kativik Regional Government-Makivik release.

“Just under 70 per cent of Nunavik families earn less than $34,000 per year. The change will free up much needed funds for food and clothing.”

There’s no set date for cabinet to approve the modification but once ratified, the interim rent scale will be retroactive to July 1, 2016.

At that point, Kativik Municipal Housing Bureau tenants will have 120 days to apply for the rent reduction by bringing their most recent Notice of Assessment into their local KHMB office.

The KMHB said tenants are welcome to come by any time with their 2015 and 2016 assessments to find out if they’re eligible for the reduction.

In the meantime, the housing bureau will continue to apply the current rent scale.

In 2014, the Quebec government announced the partial rent freeze for certain public housing tenants in Nunavik, while parties would negotiate a new rent scale.

It was largely Nunavik’s middle-earners, or households that make roughly $40,000 to $90,000 a year, who benefited from the freeze.

The KMHB said the new scale should reach more Nunavimmiut tenants this time around, given the amount of income used to calculate the rebates is higher.

But Makivik and KRG are still calling this latest agreement an interim one; the region hopes to have a permanent rent scale in place by July 2020.

Their negotiations will be based, at least in part, on a new cost-of-living study that showed Nunavimmiut pay 13 per cent more overall to live in the region than they would if they were based in Quebec City.

The percentage of household income spent on food and shelter showed a greater disparity, the study shows: 70.3 per cent in Nunavik compared to 41.3 per cent for residents of Quebec City.