“We have lots of dreams” 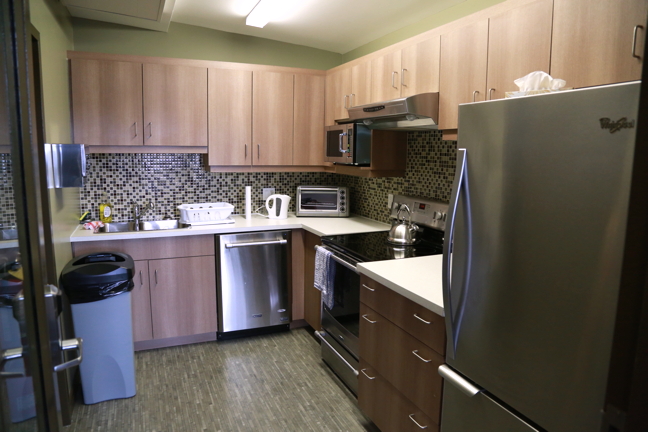 The Naujaaraaluit Hotel has a fully-equipped common kitchen area where guests can cook their own meals. (PHOTO COURTESY ILISAQSIVIK) 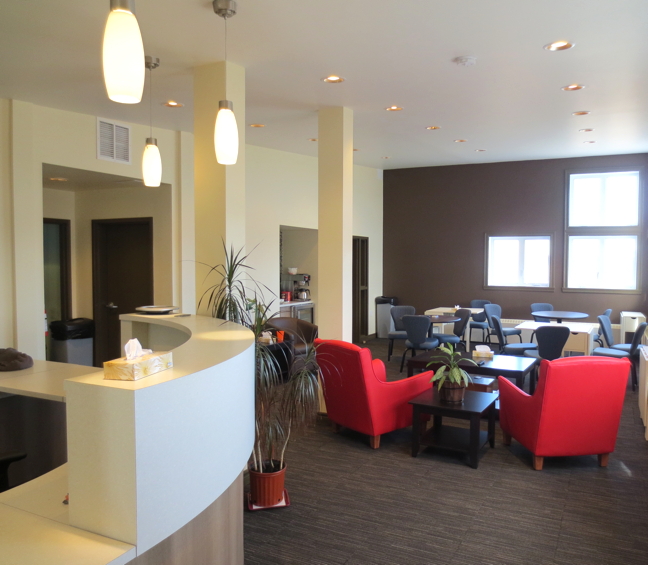 The modern lobby of the new Naujaaraaluit Hotel. The space will soon feature local artwork and photos of Ilisaqsivik programs, to highlight the different activities and services that hotel profits go to support. The hotel encourages local residents to enjoy the lobby as well, offering coffee, tea, and bannock, as well as cable TV and games. (PHOTO COURTESY ILISAQSIVIK)

More rooms. More visitors. More money — at least that’s the hope behind the construction of a new hotel in Clyde River by the non-profit Ilisaqsivik Society.

The Naujaaraaluit Hotel, owned and operated by Tukumaaq Inc., a subsidiary of Ilisaqsivik, is meant to address critical issues in the north Baffin community of about 950.

The hotel will provide some much needed cash flow to the financially starved organization and supplement its charitable endeavors.

Most importantly, however, is the goal to get more people visiting the region.

The only other existing hotel has been booked solid for several years — restricting visitors to the six double-bed suites available there.

Jakob Gearheard, executive director of the Ilisaqsivik Society, believes the lack of accommodation has had a direct impact on the availability of basic services to the residents of Clyde River.

“We’ve had lots of people wanting to visit Clyde River to do lots of different projects,” said Gearheard. “But everyone, including court parties, Department of Health workers — they’ve all had problems finding a place to stay because we’ve been so booked.

“By having more rooms for people to come visit we can get services from medical personnel or dentists that, for a long time, haven’t been able to find rooms.”

The new facility provides eight single-tenant suites, as well as a 24-hour kitchen available to guests so they can prepare their meals.

The hotel will also employ a local full-time manager and four part-time workers to facilitate the needs of guests.

The Naujaaraaluit is conveniently located across the street from its rival hotel. If that seems like poor business planning, Gearheard stresses the importance of co-operation rather than competition in Clyde River.

“We’re both community organizations so we’re trying to work together with the other hotel,” said Gearheard. “Our goal is to attract more people into coming to Clyde River to do more events and increase economic development together.”

Gearheard expects the hotel to start turning a profit within the first three years — that is, a modest profit over their substantial loan payments for the hotel’s construction.

While all remaining profit from the venture will go back into Ilisaqsivik’s charitable projects and programs, Gearheard has yet to hear of any new funding from any level of government.

“We have been so busy recently maybe we have missed a call, but we would be interested to be sure.”

The immediate effects of the new hotel, at least, cannot be understated, says Limike Palluq, chair of both the Ilisaqsivik Society and Tukumaaq Inc.

“There were many people trying to come to our community to work but couldn’t come here because of lack of space,” said Palluq, with help from a translator.

“I have a vision in the future for a restaurant in the hotel and maybe a garage.”

For now, the dreams of Ilisaqsivik are limited by the available budget, but that doesn’t stop organizers from planning for new programs and facilities, should the hotel prove a success.

“We have lots of dreams,” says Gearheard. “Our biggest one is to build a new Family Resource Centre — we’ve outgrown our old one.”

“We have two or three people sharing the offices, which is not great because a lot of those people are councilors or justice workers and they need private space for meetings.”

Beyond the centre, the society also wants to build a new health facility for Clyde River, and provide a more comprehensive post-drug treatment program so they can offer resources to recovering addicts after they return home.

Relying on more bank loans wouldn’t be prudent: Ilisaqsivik is hoping the hotel will generate enough profit over the years to slowly save for their grand vision instead of going into debt.

Ilisaqsivik is a community organization and charity based in Clyde River, which offers a number of social programs meant to improve family wellness and addiction treatment in the area.

In 2011, Ilisaqsivik was put on the Tides Canada top 10 list for their “innovative and forward thinking projects.”

The following year, Ilisaqsivik was honored with a Prime Minister’s volunteer award in the “social innovator” category.

But, due to its project-by-project funding support, Ilisaqsivik often suffered from serious financial problems over past years, something which the new hotel may help solve.

The Naujaaraaluit Hotel opened Aug. 7 and welcomed its first guests that night.