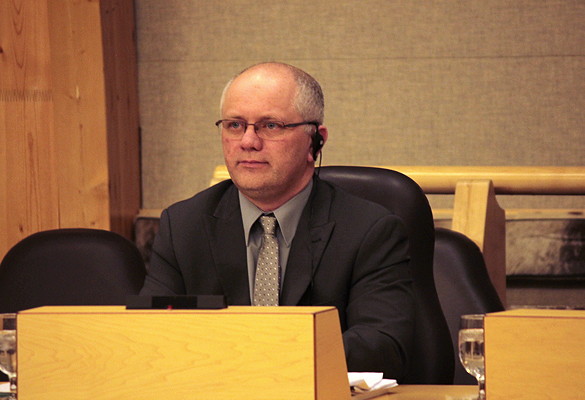 Hudson Bay MLA Allan Rumbolt went to bat for volunteer searches in the legislative assembly March 9, asking the minister for community and government services what he could do for volunteers whose equipment gets damaged. (PHOTO BY LISA GREGOIRE) 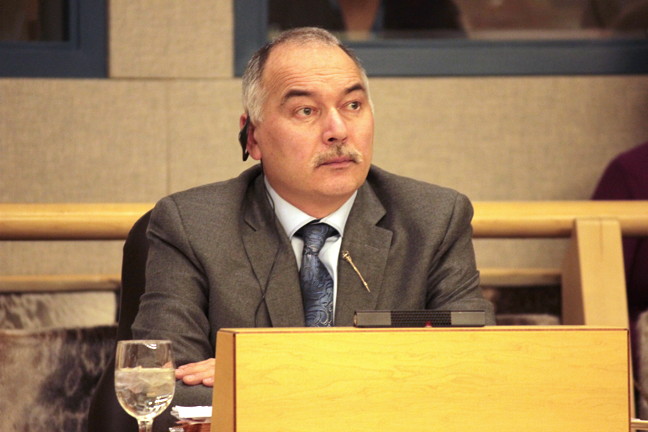 CGS Minister Joe Savikataaq said volunteer searchers are valuable to Nunavut and promised a new search and rescue policy, now in draft form, will reimburse them for damages incurred during authorized searches. (PHOTO BY LISA GREGOIRE)

Under a new Government of Nunavut search and rescue policy, volunteers who use their own equipment during searches will be eligible for reimbursement should their equipment get damaged during authorized search operations.

The new, soon-to-be-released policy came to light during the legislative assembly’s question period March 9 when Hudson Bay MLA Allan Rumbolt asked Joe Savikataaq, the GN’s community and government services minister, why volunteer searchers have to bear the cost of wear and tear on their equipment.

Rumbolt quoted the current policy which outlines eligible and non-eligible expenses for search and rescue operations in which the “repair of equipment to pre-search conditions” is listed under the non-eligible category.

“I believe that if a search and rescue volunteer risks his or her own equipment during an authorized search, he or she should not have to worry that they’ll have to pay for any damages that occur during the search,” Rumbolt said.

“Can the minister explain why the government’s current policy does not cover repairs of damaged equipment?”

The question was timely, Savikataaq said, since his department is in the final draft stage of a new search and rescue policy that in fact contains a section on volunteer equipment reimbursement.

“Search and rescue organizations in the communities are vital and they’re useful,” said Savikataaq. “I agree with the member that these volunteers go out on their own, without being paid, using their own equipment and we all know there’s wear and tear on that equipment.”

That new regulation would require that volunteers submit their boats or snowmobiles, for example, to a brief inspection prior to embarking on a search so that any pre-existing damage or wear and tear could be recorded.

In the past, some equipment damaged during search and rescue operations has been covered by the GN, Savikataaq said, but it was ad hoc and depended on whether local search and rescue committees did their due diligence and petitioned CGS on behalf of the searcher.

Under the new policy, that process will be formalized, said Savikataaq.

Rumbolt asked how many times exceptions have been made to allow Nunavut volunteer searchers to get paid for out-of-pocket expenses.

“I can’t inform the member right now. I don’t have that information in front of me as to now many times this system was used, but each case would have been judged on its own merit,” Savikataaq said.

The minister promised to find out the exact number from the past year.

Rumbolt then asked what searchers can do now, prior to the release of the new policy, if their equipment is damaged.

The minister had no specific advice for Rumbolt except to say that as it stands, damaged equipment is replaced or reimbursed on an “ad hoc basis.”

When asked later, Savikataaq told Nunatsiaq News said he hoped the new SAR policy would be released within the next few months.

It is currently being scrutinized by the RCMP, he explained, to ensure it complies with police rules and regulations since RCMP are the lead agency when it comes to coordinating search operations in Nunavut.