New public-private Iqaluit airport to cost up to $300 million

“This is a new airport. It is a massive project” 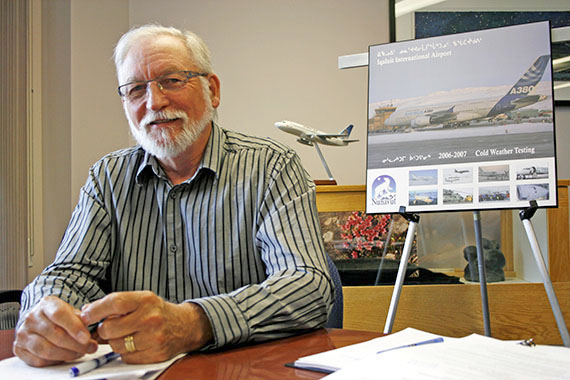 Bob Long, Nunavut’s deputy minister of economic development and transportation, at a press conference July 5. ““Don’t think of this as building a new airport building or a new terminal. This is a new airport,” Long said. (PHOTO BY DAVID MURPHY)

Officials developing plans for Iqaluit’s proposed new privately-built airport estimate the project could cost the Government of Nunavut and a yet-to-be-chosen private partner up to $300 million.

The new airport will replace the current airport, and contain many big improvements, Bob Long, the deputy minister of economic development and transportation, said July 5 at a press conference.

“Don’t think of this as building a new airport building or a new terminal. This is a new airport. It is a massive project, Long said.

The new airport will feature an additional taxiway and apron for airplanes to park, load, and be gassed up. This will speed up taking-off and landing procedures, GN officials said.

“We only have one taxiway [right now],” Hawkins said.

This means aircraft must wait until the runway is completely clear before they can take off.

With an additional taxiway, airplanes can prepare for take off while other airplanes are landing.

“So that really changes the circulation patterns, and increases the density of how quickly we can move things through here,” Hawkins said.

The plan provides for a new airport terminal building that will be four times bigger than the size of the current terminal, based on functional plans for the building.

The new terminal will feature all the bells and whistles found in a modern international airport, such as luggage belts, separate holding spaces for passengers, passenger screening areas, washrooms, a restaurant, a coffee shop, and a souvenir shop.

The existing terminal building isn’t going anywhere, however. Flight services, NAV Canada, and airport administration will remain at the bright yellow tower, but it will be retrofitted.

A new parking lot with drop off and pick up zones will be constructed, and the current 20-year-old “deteriorating” runway will be repaved, which may cause the airport to shut down for a day, Hawkins said.

The complete master plan for the project will not be released to the public until the request for qualifications and request for proposals bidding stages, aimed at finding private firms to build the structure, are complete.

The plan is to provide for expansion of the airport in 25 years to ensure that additions can be made, if needed.

The RFQ stage, which asks consortiums or firms to indicate interest in the project and to state their qualifications, started June 29 and will close Aug. 15.

After this, three consortiums will be invited to the RFP stage, where the groups will detail their design ideas and the cost of the construction. The RFP stage will start in the fall, and will take nine months to complete.

The GN is encouraging Inuit firms to express interest in the RFQ phase.

“We’re optimistic Inuit companies will want to become involved some way in working with the proponent,” Long said. “We’re encouraging [the proponent] to make connections with Inuit owned businesses in Nunavut to provide part of the services as a subcontract to them.”

For the project, the GN is using the consulting firm Partnerships B.C., a British Columbia government-operated agency that oversees major infrastructure projects, usually only in B.C.

“We knew we needed outside help,” said Paul Mulak, the director of program management and community and government services at the GN.

“Partnerships B.C. are a provincial government entity. We are allowed to partner with them because of that fact. They were chosen based on expertise and track record,” Mulak said.

The B.C. company has overseen 16 completed projects, from bridges to transportation systems, and has eight more projects under construction in B.C.

“Our experts at Partnerships B.C. are proud to say they bring in all their projects on time and on budget. So hopefully, that 2017 date will be met,” Long said.

The airport will be run on a 30-year operational term, where the proponent, selected after the RFP stage, will be responsible for maintaining, operating, and constructing the airport.

The proponent will pay half the price tag for the new airport. Through a public private-partnership agreement, they will be repaid by the GN based on delivery of the project.

This will be the first time such a public-private partnership has been done in Nunavut, Hawkins said.

“For us, it’s new — the government’s never done anything quite like this before,” said Long.

“But it has become an accepted model across Canada and the world. So we should get a very high quality, well operated, airport,” he said.