Following the late night blaze that ripped through a section of Iqaluit’s Creekside Village rowhousing late Feb. 26, dozens of residents who were accounted for are staying Feb. 27 at the Frobisher Inn or at Nunavut Arctic College’s Ukkivik residence, where they await news on the fate of their homes and belongings.

The tenants – many of them students of Nunavut Arctic College and their families – were also anxious to know what social services the potentially homeless residents have to rely on.

Officials say 22 units were affected by the blaze, although it’s not yet clear how many residents lived in those units.

She and her two roommates, also Arctic College students, left the unit with only their coats and saw flames licking out the windows of the row housing unit across from their own.

The students say their unit was burned to the ground overnight.

“But I’m not concerned about things that can be replaced,” said Ekidlak, an Inuit studies student. “I only care that my friends and family are okay.”

Another Creekside resident, Naudia Alooloo, heard from police just before midnight Feb. 26, when they asked her to vacate her unit.

“Police told us to get out because there was smoke starting to get into the house,” she said.

Alooloo woke her two young daughters took them to the Frobisher Inn, where she said she “barely slept.”

Alooloo said she hasn’t heard any news on the fate of her unit or if any of her belongings survived the blaze.

But NAC officials say they are meeting the needs of students and their families who were left homeless when the 300-block of Creekside Village burned to the ground overnight.

“Our hearts go out to all of those students and their families left homeless by this fire,” said NAC president Michael Shouldice in a Feb. 27 news release.

“The college will arrange permanent housing for all displaced students as soon as possible.”

All but one of the 22 units of the block affected by the fire was leased to the college.

In the meantime, affected students and their families are staying at the college’s old Ukkivik resident and the Frobisher Inn, while others are staying with family or friends.

In Iqaluit, donations can be dropped off at the old Ukkivik residence on Federal Road.

Cash and store gift cards will also be accepted and distributed to families affected by the fire.

Donations can also be made to Iqaluit’s Canada Post office.

Jordan Grenke, the Iqaluit postmaster, said donors may put items into a bin inside the post office or give them to staff over the counter.

The Iqaluit thrift store at building 655 is open Feb. 27 from 6:00 p.m. – 8:00 p.m. when Creekside Village residents who lost their homes to the fire are welcome to come and take whatever items they need.

In Ottawa, donations can be brought to the First Air and Canadian North cargo desks at the city’s airport, where items will be shipped to Iqaluit free of charge. 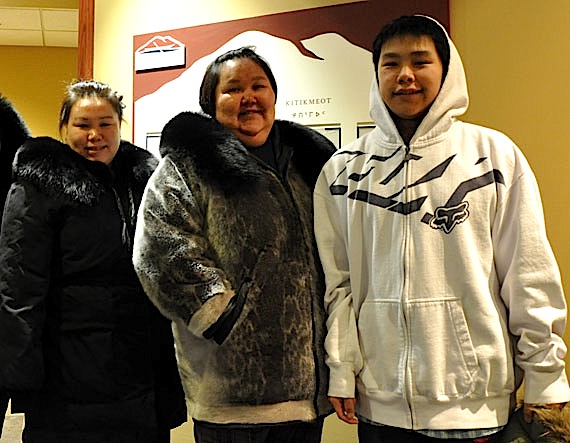 Nunavut Arctic College students and roommates (from left) Caroline Meeko, Christine Ekidlak and Abelie Ekidlak heard the fire arlam go off in their Creekside Village unit Feb. 26 at 9:30 p.m. The trio hardly had time to grab their jackets before they were sent over to the Frobisher Inn, where a number of Creekside residents stayed the night. The students will attend a meeting at the college later this morning to hear what kinds of social services are available to the many tenants who lost their homes in the late night fire. (PHOTO BY SARAH ROGERS)