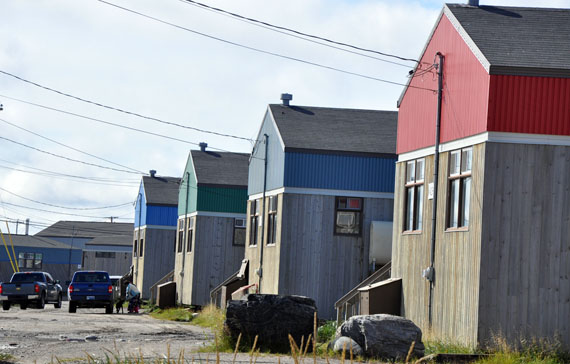 Quebec’s social housing body has refused a request to freeze rent in Nunavik this year. Regional organizations hoped to carry out a review of the region’s rent scale that would take into account Nunavik’s cost of living. (FILE PHOTO) 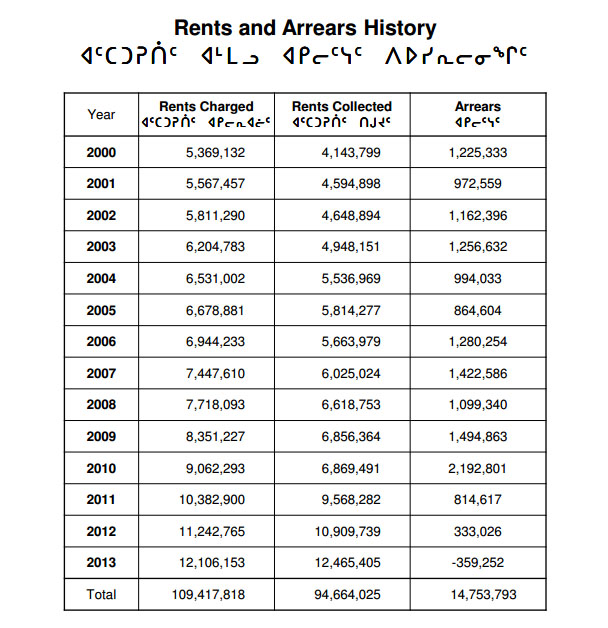 Social housing arrears in Nunavik dating back to 2000. For the first time in 20 years, the Kativik Municipal Housing Bureau collected more rent than it charged in 2013. (IMAGE COURTESY OF THE KMHB)

Quebec’s social housing body has refused a request made by Nunavik organizations to freeze rents in the region this year.

In December, the Kativik Regional Government and Makivik Corp. asked the Société d’habitation de Québec to cancel the eight per cent rent hikes set for 2014-15 until a review of the region’s rent scale can be carried out, taking into account Nunavik’s cost of living.

Nunavimmiut — the vast majority of whom live in social housing — have paid an eight per cent increase in their rent every year since 2010. And many say it’s too much.

The KRG councillors learned about the SHQ’s response during council meetings in Ivujivik last week, and said the housing body gave no explanation for its decision.

Earlier this winter, the Kativik Municipal Housing Bureau, which oversees social housing in Nunavik, said its parent agency, the SHQ, had argued that Nunavimmiut already pay the lowest social housing rents in Quebec.

The KRG said it will continue to work to stop that eight per cent rent hike, which is to be implemented July 1. Nunavimmiut renters were already advised of the rent hike April 1.

While renters have complained of rising rents, more Nunavimmiut are paying off their arrears than ever before, the KMHB told regional councillors last week.

For the first time in 20 years, the housing bureau collected more rent than it charged in 2013.

The housing bureau has accumulated some $15 million in arrears since 2000 that it’s struggled to collect.

“For the first time since 1983 the rent collected exceeded the rent charged, meaning we’ll be able to bring down our arrears,” said Watson Fournier, the KMHB’s manager. “So we’re very happy. We’d like to thank the tenants who made the effort to pay.”

The KHMB has still has more than $14 million in accumulated arrears, but Fournier said it’s a start.

He credits the increase in rent paid to the housing bureau’s Pivallianiq program, which encourages tenant pride, as well as offering more convenient ways to pay rent, like online or by phone.

The KRG council also announced May 27 its housing allocations for 2015, when 80 new homes will be built in six communities.

Puvirnituq will receive 20 one-bedroom units, while Kangiqsujuaq will see 12.

And on the Hudson coast, Kuujjuaraapik will see eight new one-bedroom units built.

But as the current tripartite housing agreement — which has delivered 340 housing units to Nunavik since 2010 — expires in March 2015, and a new agreement has yet to be negotiated.

For the past several months, Makivik has also pursued the federal government to pay for a long-sought-after catch-up program to build enough housing in Nunavik to end the region’s housing crisis.

That, Makivik says, should flow from Ottawa’s obligations under the James Bay and Northern Quebec Agreement.

Makivik has said that, by failing to live up to its obligations under the JBNQA and pay for the construction of housing over a six-year period in the 1990s, the federal government spurred a housing crisis that has today left 68 per cent of Nunavik’s population living in overcrowded housing.

Earlier this year, Quebec estimated the cost of building the 900 units required across the region at about $185 million.