May 31: No Tobacco Day reminds Nunavummiut about smoking hazards 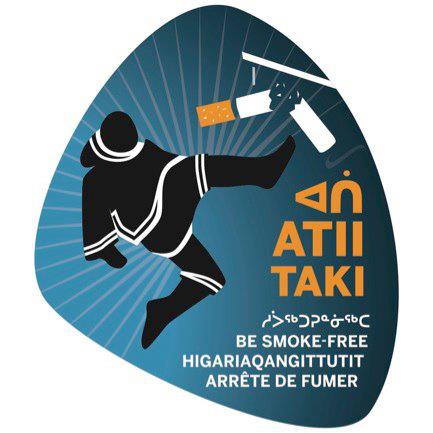 “Atii, taki” is the motto of the Government of Nunavut’s “Tobacco has no place here” campaign which will see three winners — one from each region — winning iPads on May 31.

In a territory where smoking rates are higher than anywhere else in Canada, World No Tobacco Day, May 31, marks a chance for the Government of Nunavut to encourage Nunavummiut to kick the habit.

The territorial government has done just that this year through an online campaign, with its Facebook page called “Tobacco Has No Place Here.”

“Instead of doing community events across the territory, we decided a more centralized, Nunavut-wide challenge on Facebook,” said Paige Marshall, health promotions specialist with the Department of Health and Social Services.

Through the Facebook page. the department invited territorial residents to sign on for a photo contest, to submit a photo of a place, or people, that motivate them to quit and avoid smoking, Marshall said.

The contest closes at the end of No Tobacco Day, May 31. Winners will be selected from each of the territory’s three regions, and each will earn an iPad for their effort.

“It’s the first time we’ve done the online challenge, and we’ve seen an amazing response,” Marshall said. The health department’s “Tobacco has no Place Here” page counts almost 5,500 friends on Facebook, which is a good measure that the word about smoking cessation is getting through, she said.

Canada, like other member countries of the World Health Organization, highlights the day as a chance to remind and educate people about the risks associated with smoking and tobacco use in general.

“Tobacco use is the single most preventable cause of death globally,” the WHO states on its website, “and is currently responsible for killing one in 10 adults worldwide.”

That statistic may be even worse in Nunavut. The territorial government reported earlier this year that some 60 per cent of territorial residents more than 12 smoked cigarettes daily in 2011, amounting to three times the national average.

This marks the second year of the territory-wide “Tobacco Has No Place Here” campaign to reduce smoking in Nunavut, which has the highest smoking rates in the country.

The territorial anti-smoking campaign appears to be showing some success since its start in January 2012, said Marshall, as smoking rates have dropped by about three per cent from the 2011 to 2012.

An increase in cigarette taxes in 2012 has also contributed to this, she said. Territorial taxes on cigarettes increased by $1 per pack in February that year.

On top of this year’s photo challenge, some communities will mark No Tobacco Day by reminding their residents about the hazards of smoking.

“Community health representatives in all the communities are really familiar with No Tobacco Day, so they were welcome to hold events across the territory,” she said.

Iqaluit will mark No Tobacco Day so with an afternoon community feast, from 1 p.m. to 4 p.m., at the elders’ qammaq where people will have a chance to celebrate smoke-free living over country food.

“It’s a celebration for everyone, especially the elders,” said Martha Malliki, community health representative for the Department of Health and Social Services. “It’s also a chance to see the resources we have to help quit smoking.”

Country food such as maktaaq, char and bannock will be served, with a nod to healthy living, while health services will offer “quit-smoking” information kits to help smokers drop the habit. Inhalers, patches and other quit-smoking aids are available by prescription through public health, said Malliki.