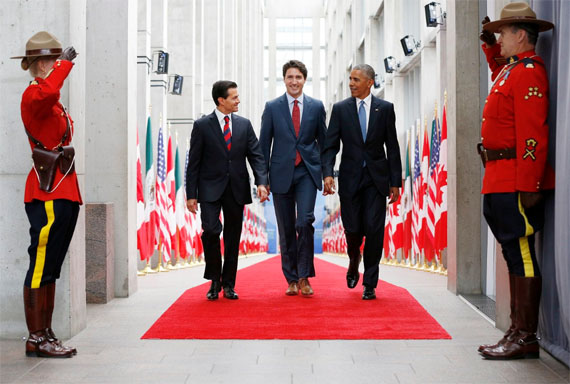 North American leaders took a major step towards their fight against climate change this week by committing to cleaner energy generation across the continent.

That’s where the trio announced that half of their nations’ electricity will be produced through clean power generation by 2025.

Canada, the U.S. and Mexico said they will work together to implement the historic Paris Agreement — the first universal, legally-binding global climate deal, drafted in 2015 — whose goal is to limit temperature rise this century to 1.5 degrees Celsius.

The new targets commit the three countries to reduce their emissions by at least 40 per cent, which includes methane and “short-lived climate pollutants” such as black carbon (soot) and hydrofluorocarbons, compounds used primarily as refrigerants.

The effect of methane alone on climate warming has been estimated to be 25 times more potent than carbon dioxide, the most common greenhouse gas.

“Common sense actions to reduce these pollutants will deliver significant climate and health benefits in the near term and into the future, supporting our goal to limit global warming this century,” said the joint June 29 statement.

The North American agreement builds on a U.S.-Canada partnership Trudeau announced during his first official trip to Washington last March, which pledged to make the long-term health of the Arctic a priority.

This Northern American summit announcement had little to say about the Arctic environment, although leaders repeated their goal to collaborate with Indigenous leaders and communities to incorporate traditional knowledge in natural resource management.

Nunavut made a small appearance in this week’s state visit; in a state dinner hosted in the lead-up to the summit June 28, one of the courses featured caribou loin from Rankin Inlet, hot-smoked with heather.