Northern retailer kicks in cash to clean up Nunavut capital

$35,000 will pay for student salaries, equipment and supplies 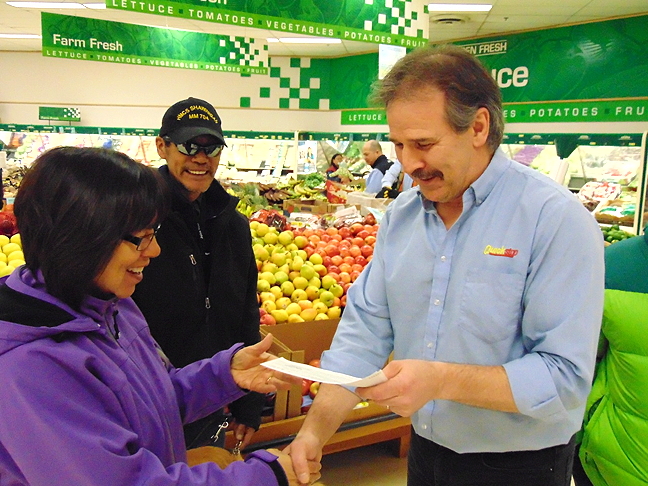 Iqaluit’s Northmart store manager Cliff Stringer presents Iqaluit Mayor Mary Wilman with $35,000 for the city’s summertime litter clean-up efforts during a small cheque-presentation ceremony at the store, May 12. City councillor Noah Papatsie can be seen in the background. (PHOTO COURTESY CITY OF IQALUIT)

The City of Iqaluit will get some help cleaning up three season’s worth of litter and garbage this spring and summer thanks to a recent contribution from the North West Co.

In a cheque presentation ceremony at Iqaluit’s Northmart store, May 12, the Northern retailer gave the city $30,000 to fund a “summer student litter team program.”

The money will pay the salaries of two summer students employed by the public works department to keep the Nunavut capital’s streets and public spaces garbage free.

The contribution marks the second straight year of the litter team program, which North West also funded last year, at the same amount.

On behalf of the retailer, Northmart store manager Cliff Stringer also presented mayor Mary Wilman and other city officials with another $5,000 for the community’s annual city-wide springtime clean-up event, which takes place June 19.

“It raises awareness about keeping our environment clean, and it beautifies our community,” she said May 15.

The fund is particularly welcome in a time when the city has had to find “creative ways” to work around its cash-strapped finances, Wilman said.

This year’s budget is marked by a deficit estimated at about $7.5 million. The city is also sitting on an accumulated debt of more than $10 million over the past three years, according to the Iqaluit Chamber of Commerce.

“We are struggling with a reduction of financial means,” the mayor said. “Every bit helps.”

The $30,000 fund will allow the city to hire two students as clean-up workers for the public works department.

“The two students that we hired did a lot that our regular staff wouldn’t have been able to do,” she said, “because there are so many demands to keep up with the regular services that we provide.”

Community-wide litter-cleaning operations are “over and above what we’re able to do,” she said.

North West’s additional $5,000 will pay for clean-up equipment such as wheelbarrows, rakes and shovels, which the city will use in its annual city-wide clean-up, June 19, and other clean-up efforts.

The one-day event clears the city of the bulk of litter and garbage that emerge from melting snow in the spring, but it’s not enough to keep the city clean for the entire summer, the city’s community economic development officer, Joamie Eegeesiak, told Nunatsiaq News.

The city’s summertime festivities — such as the Alianait music festival, Nunavut Day, and Canada Day, among others — call for more effort.

“The public works department will help out too, with whatever they can gather,” and the added equipment will help them do that, Eegeesiak said.