“We do hunt moose, we do hunt other animals. Sealing is a hunting thing” 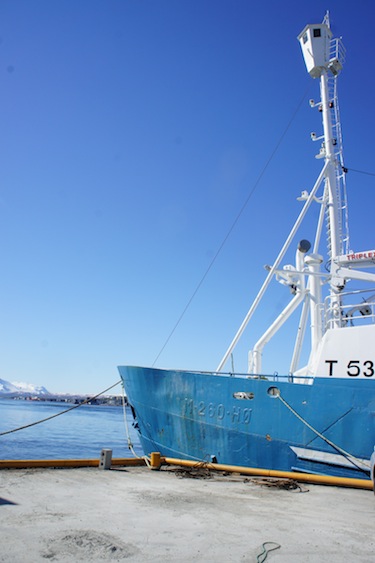 The Institute of Marine Research in Tromsø sent out a veterinary researcher on board the Kvitbjorn this year to look at the seal hunt. (PHOTO BY ALEX BOYD)

TROMSØ, NORWAY — Norway, hit hard by the European Union’s seal product ban, wants to use research to show the world that they’re sealing in an acceptable manner.

That’s why Tore Haug, a researcher with the Institute of Marine Research in Tromsø, says extensive monitoring is done to make sure seal populations hunted by Norway’s sealers are healthy.

Right now, there are so few boats hunting, they’re not catching the full quota, so “there is no reason to worry about [overhunting] now,” he said.

One of Haug’s colleagues, who sailed also onboard one of Norway’s last sealing vessels, the Kvitbjorn, is looking at how seals are killed — to counter the claims that sealers are inhuman.

They were taken from seals at all stages of the kill process because Ryeng, wanted to look at how seals are killed, how quickly that’s done, and to try and respond to the question of just how humane the hunt is.

She’s careful to say she hasn’t finished crunching the numbers — or examining the seal heads — but she cautiously allows that on first glance she’s “quite impressed with these professional sealers who really know what they’re doing.”

Norway has long had regulations on how seals must be killed, she said, but it’s her job to evaluate how effective those methods are.

Seals in Norway have to be killed using three methods, she says.

Adults and most of the pups are shot, then hit in the head with the hakapik, then finally bled out by cutting the major vessels under their flippers.

Ryeng sketches a hakapik as she explains it’s similar to tools used in Quebec and the Atlantic provinces — a long handle with a metal piece on the end, blunt on one side and narrowing to a sharp point on the other.

Early in the season some pups, but not those still with their mothers, are killed with the hakapik only, but in that case they’re hit twice with the hakapik before being bled out, she said.

The tool is often a lightening rod for criticism.

“I see how people who live in big cities or any person who doesn’t understand sealing, they might react,” she said.

But “to put it this way,” she adds, “there’s a reason this tool is used, it’s very effective.”

She adds, “we do hunt moose, we do hunt other animals. Sealing is a hunting thing.”

Haug echoes the sentiment. “I’m born and raised in this northern region, so I’m used to using the resources, both in the water and on land, but especially in the ocean.”

“Of course we should aim at doing it the best way, but to stop it entirely — no way.”