Nunavik athlete switches gears ahead of this year’s AWG

“I’ve gained so much confidence in myself” 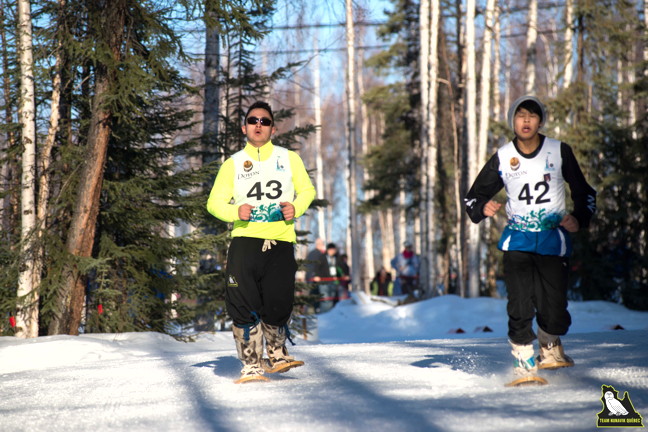 Narrowly missing the podium two years ago has a Nunavik athlete from Kangiqsualujjuaq hungry for his first medal — or ulu — at the upcoming Arctic Winter Games in Nuuk, Greenland, which are set to start March 6.

But in a strange twist of fate, Jimmy Emudluk is abandoning years of training and experience in one sport to seek that first medal in a completely different one.

Emudluk, 18, will represent Team Nunavik-Québec in the Dene Games, after placing fourth in snowshoeing at the 2014 Arctic Winter Games in Fairbanks, Alaska.

This year’s tournament in Nuuk will mark his third appearance on Team Nunavik-Québec at the games.

And despite never competing in the event at this level, Emudluk said his departure from snowshoeing is a tactical retreat to his natural talents.

The overarching category of Dene Games includes such feats of strength as the agonizing finger pull competition, the spear-throwing event called snowsnake, and the team pole push event.

There will also be an all-round category winner which combines the total scores for the individual Dene events, according to the Arctic Winter Games website.

The physical demands required of athletes are high for any of the Dene competitions but Emudluk said he’s meeting those requirements with a newfound confidence.

“I enjoy [them] because I feel confident doing it. I didn’t have much confidence doing snowshoeing because my cardio was pretty low,” Emudluk said over the telephone from his home in Kangiqsualujjuaq.

After his fourth place finish in 2014, a friend of Emudluk’s suggested he try out for Dene sports.

“I was really surprised,” he laughed, reflecting on his early success.

Apparently, it was perfect fit.

Since that time Emudluk has undergone a rigorous seven-days-a-week training regimen that’s retooled his lean snowshoeing frame into a Dene sports competitor.

“When I competed in Fairbanks I weighed like 170 pounds, when I was running. And now I’m at 210 pounds,” he said on his muscle gains.

But being a Dene athlete in a predominantly Arctic region of Canada posed unique challenges for Emudluk in preparing for Nuuk.

“The fact that I’m the only person going to the AWGs as a Dene athlete [from Kangiqsualujjuaq] it’s really challenging. I can’t train with someone that I’m competing against,” he said.

“I’ve been training on my own.”

As unorthodox as his path has been to these winter games, Emudluk says the journey has undoubtedly left him a better man.

“I’ve gained so much confidence in myself. If I had never tried out in the first place for snowshoeing I don’t think I’d be this person physically,” he said.

And his schooling and leadership skills have grown because of his exposure to the Arctic Winter Games, he said.

Emudluk is excited to see Greenland for the first time, but said everything will take a back seat to Dene games when he arrives in March.

His drive to the podium isn’t over yet.

“Just like I said, I’m feeling pretty confident for the games this year.”

The 2016 Arctic Winter Games take place March 6 to March 11 in Nuuk, with a satellite hockey tournament scheduled for Iqaluit.

Previous stories on Nunatsiaq News about the games include:

• Greenland-Nunavut plan creative collaboration at Arctic Winter Games: “A lot of the music that young Inuit make has to do with love”

• Nunavik athlete rallies from loss ahead of Arctic Winter Games: “All that grieving led to alcoholism. My family was drinking a lot”