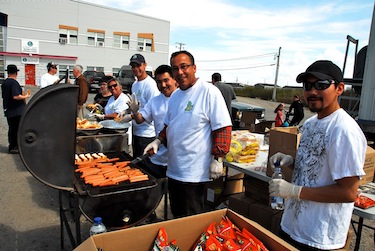 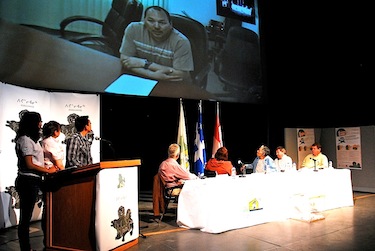 Michael Cameron, the president of the Kativik Municipal Housing Bureau, speaks June 8 via video-conferencing to the Pivallianiq Housing Pride Day celebration at the Kaitittavik town hall in Kuujjuaq. (PHOTO BY ISABELLE DUBOIS)

The five won these prizes in a draw held on Nunavik’s new Pivallianiq housing pride day. That’s when they and 85 other eligible Nunavimmiut in six of the region’s 14 communities stood to win grand prizes and participate in separate local draws for prizes like a flat screen television, one-month’s free rent and an XBox.

All 80 were first certified as good tenants through the Kativik Municipal Housing Bureau’s Pivallianiq program.

“This is a momentous day for the KMHB,” said KMHB president Michael Cameron, speaking June 8 at the Pivallianiq event held in the Katittavik town hall. “This Housing Pride Day is destined to become a glorious Nunavik tradition.”

The Pivallianiq program is now open to all Nunavik families in all 14 communities, where there are more than 2,400 social housing units.

“Families who need it can get expert advice and support to bring order to their homes and to develop the will to maintain them,” said KMHB board member Mary Nassak about the program.

And families can also get KMHB certification recognizing the efforts they have already made to maintain their homes, appliances and surroundings, she said.

To participate in “Pivallianiq-Makeover Team,” you must be a KMHB tenant.

And your rent payment record with the KMHB must be in good standing (otherwise, participants must work out a special agreement with KMHB, which is trying to collect on some of the more than $15 million owed to it in rent arrears).

To be eligible for next year’s draws, you must hold a Pivallianiq certificate for complying with the “maintenance and cleaning guide,” handed to all participants along with a package of cleaning products.

When you qualify for Pivallianiq accreditation, you’ll get a sticker to be put on your house window and a Pivallianiq Quartuvik cutting board with an engraved Noah Meeko drawing.

New KMHB tenants will now automatically be registered in the program.

“I urge all Nunavik families to join the ‘Pivallianiq-Maintenance Team’ program. For those that are already or about to be certified, I encourage you to carry on, because your participation this year will also be valid for next year,” Nassak said.

Nassak said Pivallianiq isn’t only about winning prizes: “it’s also an opportunity for you to play a role in improving the health, lives and living environments of our families.”

When asked if people were receptive to the program, she told Nunatsiaq News that most were because the goal is not to be judgmental about the state of their house, but try to find solutions to other issues.

“We don’t care if they made their beds, or had junk cluttered on their tables, or toys scattered on the floor from their kids,” she said.

On June 8 Nassak also said hip hop will be also used to encourage youth “to beautify our overall living areas,” and, to that end, she announced the creation of a hip hop Pivallianiq team.

“We want them to express their talent and provide opportunities for positive reinforcement, and make them prouder than ever to be members of our community,” she said.

The goal is to recruit 100 12- to 18-year-old boys and girls, who will be led by Steven Leafloor, better-known in Nunavik as Buddha, who also performed at the June 8 event.

To mark Housing Pride Day in Nunavik, Quebec also unveiled the new program to promote home ownership and renovation in the region.

The program, prepared by the Quebec housing bureau and managed by the KMHB, will help pay for 200 private dwellings in Nunavik.

The program costs over the next five years are estimated at more than $68 million, of which $63 million will be used to build or acquire dwellings, and $5 million used for recurrent financial assistance for homeowners to pay municipal taxes and home insurance premiums. Money will also be available for the renovation of private homes purchased before the program came into force.

“The Quebec government is aware of the urgent need for housing in Nunavik,” said Laurent Lessard, minister for municipal affairs, in a June 8 news release. “As part of the Plan Nord, we have therefore introduced an initiative that will allow us to work in partnership with the Inuit people to create social development tools and programs tailored to their needs. As a result, they will be able to improve their living conditions.”

The program includes grants of between $184,350 and $356,250 per housing unit, and grants of $10,000 to $50,000 for the renovation of an existing dwelling. Clients will also have to take a home ownership training and mentoring program. 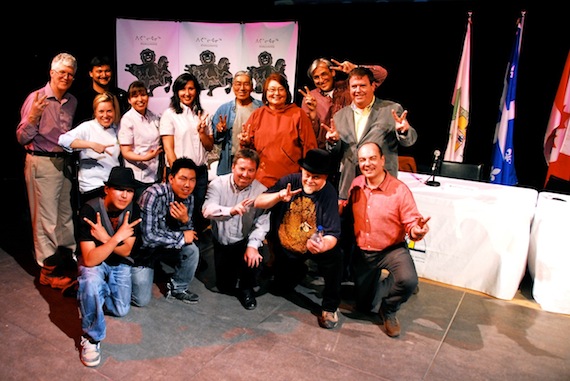