“I thought we were going to die” says Ivujivik mom, after late-night polar bear encounter 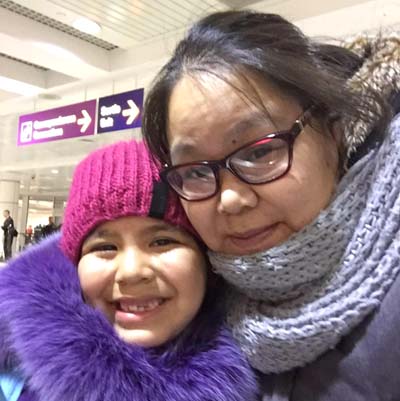 Manu Qaunnaaluk and her daughter Deseray. 6, had a frightening encounter with a polar bear while walking home in Ivujivik earlier this month. (PHOTO COURTESY OF M. QAUNNAALUK) 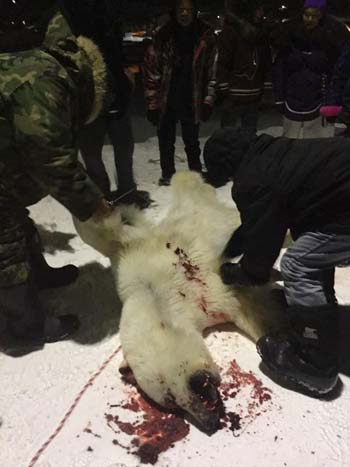 Manu Qaunnaaluk still has trouble sleeping when she thinks about that night.

It was March 8, International Women’s Day, and Qaunnaaluk and her six-year-old daughter Deseray were attending women’s games at Ivujivik’s Amaarvik Childcare Centre.

When the event ended at 11 p.m., Qaunnaaluk and Deseray left together on foot.

“When we were almost home, we heard some dogs start barking out of nowhere,” she said. “It sounded really serious.”

The pair was only a few houses away from their home in the Nunavik village of 400 when Qaunnaaluk saw the polar bear, dangerously close, at about 50 feet away.

“I told her ‘Go! Go!’ And we both started to run,” Qaunnaaluk said. “I thought we were going to die.”

Qaunnaaluk didn’t think she and her daughter could make it safely home so she pulled Deseray up the closest set of stairs and pushed inside her neighbour’s door. Qaunnaaluk said she was shaking so much she couldn’t get the door open, so she started screaming “Nanuk!” until someone opened the door to let them in.

This all happened quickly. Within the next few minutes, the next-door neighbour and owner of the dogs, Mosusie Audlaluk Jr., had come out with a rifle and shot the polar bear about seven times, until he was sure the animal was dead.

Ivujivik, situated at the northwestern tip of Nunavik where Hudson Bay meets the Hudson Strait, has seen an unusually high number of polar bears in town this winter. There have been four defence kills this year—the most recent one this past weekend—although community members say they’ve seen even more bears out by the bay.

“I’ve never seen one so close,” Qaunnaaluk said. “I was in shock.”

Quebec’s wildlife department says an average of about six polar bears have been harvested in that region each year over the last five years.

Ivujivik is the only Nunavik community that harvests from the Foxe Basin sub-population, which has no set quota. So while hunters are encouraged to report their harvests, they’re not obligated to.

No residents or dogs have been injured by polar bear attacks so far this year but the municipal council has discussed the issue and considered hiring someone to patrol the community for bears, like the Nunavut community of Arviat has done in recent years.

Farther down the Hudson coast, Inukjuak reported its first onshore sighting of a polar bear in nearly 30 years when a young and fat female was discovered at a cabin just outside the community last month.

Zoologist and University of Victoria professor Susan Crockford observed that the polar bear’s large size is unusual for this time of year, when polar bears are typically at their leanest.

“To see a young bear that’s very fat before the feeding begins is quite astonishing,” she wrote on her blog, Polar Bear Science. “It suggests that feeding opportunities out on Hudson Bay have been very good over the winter or this bear was a savvy hunter despite her youth.”