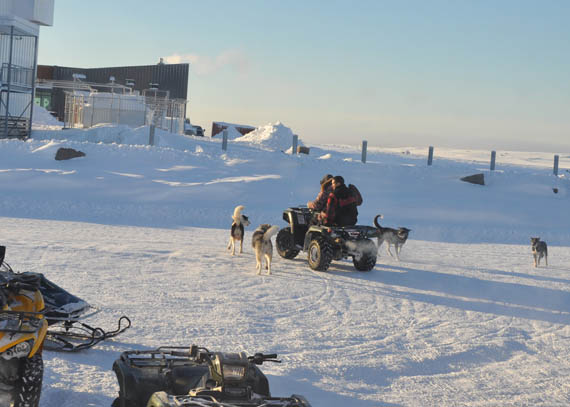 Jason Angiyou gets a lift home from the courthouse on the back of a four-wheeler after a Quebec judge acquitted him on charges of assault. The 34-year-old said alcohol has been a major factor in his criminal record and he plans to move away from Puvirnituq, where he says alcohol is too easy to get a hold of. (PHOTO BY SARAH ROGERS) 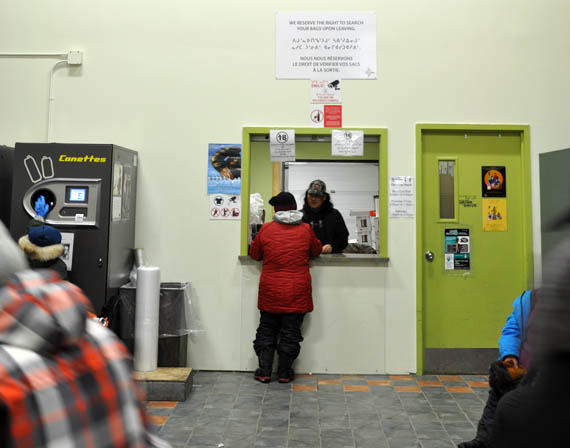 Co-op customers in Puvirnituq first pay for and then pick up their alcohol order at this counter in the lobby of the co-op store. The community has been selling beer and wine since 2015. (PHOTO BY SARAH ROGERS)

PUVIRNITUQ—Jason Angiyou was acquitted Nov. 17 on a charge of assault causing bodily harm, for allegedly stabbing another man in Puvirnituq and then threatening his ex-girlfriend.

The judge acquitted him on the threat charge due to conflicting testimony, and he’s acquitted on the assault charge because it was considered self-defence.

Angiyou credits his acquittal to a strong testimony: “I was sober when [the incident] happened.”

The 34-year-old is planning to relocate to Salluit, where his girlfriend lives and is expecting the couple’s first baby this winter.

Angiyou admits he has a “hefty” record and considers Salluit a fresh start.

“Alcohol is a big factor in my life,” he said. “I’ll try my very best to stay away from it. Here it’s just too easy to get a hold of it.

“I want to start over again.”

Lawyers who work in the criminal court in this Nunavik community estimate that around 90 per cent of their clients’ cases are related to abusive alcohol use, creating violence at home and on the road.

Over the course of week-long court sessions, a number of offenders were unable to answer questions or recall incidents in cross-examination because they had been intoxicated and “don’t remember.”

This fall marks two years since the Povungnituk Co-operative Association launched beer and wine sales from its local store. Puvirnituq was the second community in Nunavik, after Kuujjuaq, to vote to sell alcohol through its co-op store.

Residents of the community of roughly 1,800 could previously and still do order alcohol from the South, but they have a local option now: the co-op sells 12-packs of beer and boxed wine from a counter adjacent to the store six days a week.

From the time sales open late afternoon, the co-op is busy, with lines stretching through the store, while trucks, snowmobiles and four-wheelers crowd around the building.

When the sales were first introduced, Kativik Regional Police Force officers in Puvirnituq noted a drop in calls.

Bootlegging still exists in Puvirnituq, to supply harder alcohol to the market. But with beer and wine sales, some residents say that people are drinking every day—rather than binge drinking once in awhile.

“We can see it right away, whether the person is drunk on beer or harder alcohol,” Morin said. “Their behaviour is different.”

The co-op places a limit on what customers can buy each day. The current limit is 12 cans of beer, though for a time, the co-op allowed customers to purchase double that on Friday nights.

Morin said this led to a sharp increase in calls on Friday night through Saturday. The co-op eventually opted to return to its regular limit on Fridays and Morin said “it’s helped quite a bit.”

Paulusie Angiyou is a long-time municipal councillor and past mayor in Puvirnituq, and voted in favour of loosening alcohol restrictions and beer sales.

“We thought it was going to be easier if people learned how to use it,” he said.

Alcohol isn’t really the problem, he said—it’s a trigger than can unleash violent behaviour when it’s abused.

And people living with issues that drive them to substance abuse have few local options for treatment, he said. They have to go to Kuujjuaq or farther south for treatment.

Kulu Tukalak says it could take years for Puvirniturmiut to adapt to more responsible drinking habits.

“This is still very new and we’re still going through the trials,” said Tukalak, who has served as president to the co-op’s board of directors for the last year.

Even before co-op sales started, the community had a problem with alcohol, he said, so residents saw an opportunity to take charge and keep some of the money spent on alcohol in the community.

Tukalak couldn’t say what the co-op made in alcohol sales in 2017. But the co-op redistributes that money to community groups and initiatives through an application process.

The co-op’s biggest recipient is a breakfast program that receives $85,000 to serve a morning meal to students at both of Puvirnituq’s schools.

The community’s recreation committee and hockey program are other recipients.

“The direction we aim for is to reduce alcohol abuse,” Tukalak said.

“But the excitement is still there. We’re still practising and learning,” he said.

“Maybe in three or four years, our young people can learn to enjoy a few beers in a normal way.”