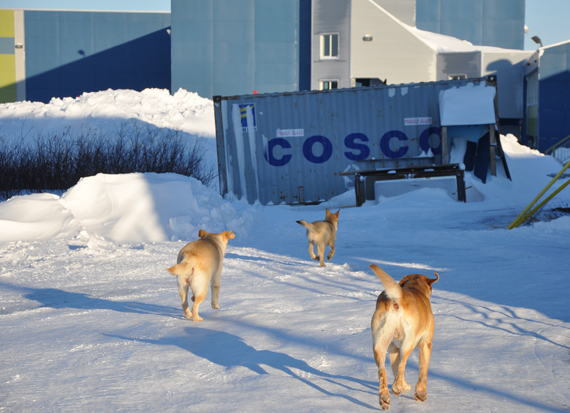 A group of dogs wander through Kuujjuaq last winter A new survey of dog owners in the Nunavik community found people would like to see more veterinary services in the community, and most would be willing to pay for them. (PHOTO BY SARAH ROGERS)

A new survey of dog owners in Kuujjuaq has found that 40 per cent of people in that community have personally been bitten or scratched by a dog, or know a family member who has.

The vast majority of them are Inuit, and they reported that, as a response to the bite or scratch, they visited the local hospital for treatment, they have had the dog killed, or both.

The 2015 survey was conducted by the Université de Montréal’s veterinary medicine department, which runs a long-distance veterinary program in Nunavik.

This is the first time the program has surveyed Nunavimmiut to gain more insight into the region’s veterinary needs.

The 40 per cent figure caught some Kuujjuamiut by surprise, with many commenting on a Facebook forum that the number was too high.

The sample size for the survey was small — 67 volunteers took part — but it’s still a figure worth noting, said Cecile Aenishaenslin, a Université de Montréal veterinarian who leads the Nunavik program.

“We are also surprised by this result, and we need your help and input to explain it,” Aenishaenslin wrote on the social media forum.

Some diseases can be transmitted through a dog scratch, such as skin infections and rabies, she noted, although bites are the main source of transmission.

But the survey also revealed some good news; three-quarters of dogs in Kuujjuaq have been vaccinated against rabies, and 77 per cent against other diseases.

And all participants said it’s important for them to have their dog(s) vaccinated to protect the animals’ health, prevent rabies and protect public health.

Vaccination clinics are organized throughout Nunavik each year by Quebec’s department of agriculture; those veterinarians also supply northern villages with vaccinations throughout the year.

But Kuujjuamiut dog owners would like to see more veterinary services available in the community, survey respondents said, citing emergency services and spay-neutering as important needs. There is no permanent veterinary clinic in Nunavik.

The survey also found that Inuit dog owners have their dogs fixed at a much lower rate (14 per cent) than non-Inuit, 63 per cent of whom have their dogs spayed or neutered.

Spaying or neutering your pets can go a long way in keeping down the stray dog population in the North, veterinarians say, particularly in a region where animals are often allowed to wander loose.

The World Society for the Protection of Animals estimates that in six years, a pair of dogs and their offspring can produce 67,000 puppies.

And 78 per cent of the same group reported that the let their dog go free “sometimes.”

Among those who took part in the 2015 survey, three quarters owned a single dog.

The remainder of dog owners had anywhere from two to 13 dogs (the latter being mushers.) Just over one hundred dogs were accounted for in the survey and their average age was three years old.

The Université de Montréal program plans to hold a consultation in Kuujjuaq in the coming months to discuss the survey results.

You can read the complete survey and get more information about the veterinary program here.