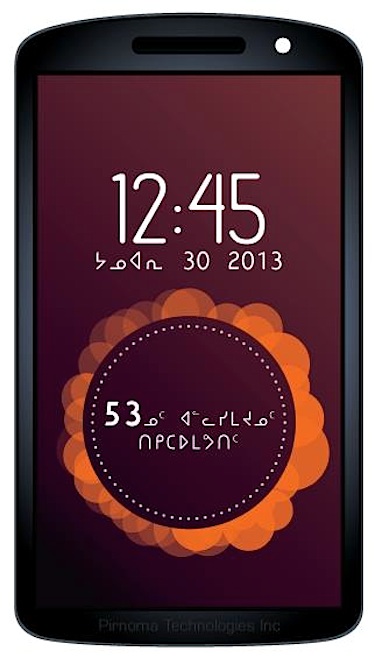 This is how a home screen using an Ubuntu operating system would look. (IMAGE COURTESY OF T. MANGIOK) 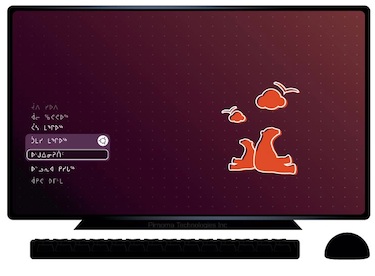 This is how a home screen using an Ubuntu operating system would look. (IMAGE COURTESY OF T. MANGIOK)

This would allow users in Nunavik to see Inuttitut — instead of English — when they’re online.

“We rely too much on the English language on computers, tablets and smartphones at work, at friend’s and at home,” said an open letter from Mangiok,  president of his design and computer company, Pirnoma Technologies Inc., which is based in Ivujivik.

But he feels the pressure from English — even in the French-majority province of Quebec.

Mangiok told Nunatsiaq News that when he first started his company and announced his computer repair services to the public, an elder asked him to translate computers so he could use them.

“I took it as a joke, but it left a mark in my head,” Mangiok said.

Mangiok, who has produced and posted other online tools, including applications, videos and comic books, to encourage people to speak and use Inuttitut, has received permission to translate a free operating system called Ubuntu.

First, he contacted Microsoft, but learned the Nunavik market was too small for the huge company.

“So I started looking into the most popular Linux-based operating systems,” he said. “Ubuntu was a clear winner. It is so popular that even Dell is selling computers with the operating system installed/

But to move ahead with the translation project Mangiok said he’s looking for more “support and exposure.”

He’s asking Nunavimmiut who support the translation project to sign an online petition.

Mangiok hopes that support can also help raise the money he needs to undertake the project.

“I am looking for financing and the money will either come if each person in Nunavik pays 30 dollars or if an organization pays for the project,” he said.

The project is worth the investment, Mangiok says, because the results will be available in a database and will follow new releases of Ubuntu.

Ubuntu works a little like Microsoft Windows or Mac OS, allowing a computer to run programs and display files, he explained.

“Imagine working with your regular work programs on Windows 8 and running Ubuntu at the same time where all programs and text are in Nunavik’s native language,” Mangiok said in his pitch to supporters.

The operating system would be free and could be installed “as many times as we want on any computer without any restriction.”

Schools in places such as, Italy, India, Germany, Pakistan, Russia, the Philippines and Iceland have already adopted Ubuntu, he said.

And many businesses such as Amazon, Wikipedia, Google, New York Stock Exchange, McDonald’s and Nav Canada use Ubuntu.

The move to Ubuntu would save Nunavik organizations money, Mangiok said. They spend large amounts of money on computers especially when they require upgrades, because each computer requires a license key to be upgraded, he said.

Ubuntu is available with pre-installed alternatives to systems like Microsoft Office, Simply Accounting, Filemaker pro and Adobe Suites, and offers access to alternatives that will work as well without any cost, Mangiok.

Mangiok says moving to Ubuntu in Inuttitut is a “step in the right direction.”

Nunavik must regain its identity and its independence, he said.

“Communication in our native language is a strong base to our standing culture and would affirm our capability to produce independently,” Mangiok said.

“The great majority unfortunately only read and write in English even when they are capable or wish they could do so in Inuttitut.”

Ubuntu in Inuttitut will “directly confront this issue,” he said.