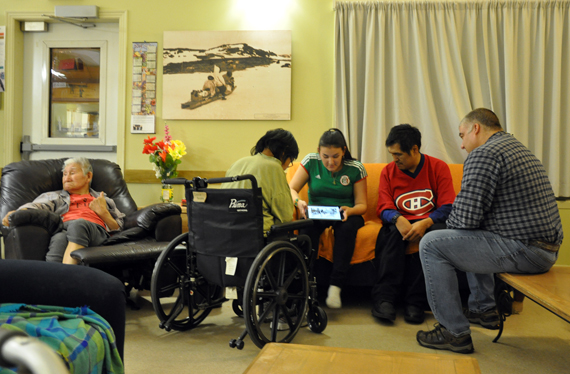 Jeannie Papigatuk shows residents of the Tusaajiapik elders home in Kuujjuaq how to use their new iPad mini, a new tool that will allow them to communicate with friends and family in other communities. (PHOTO BY SARAH ROGERS)

KUUJJUAQ — Jeannie Papigatuk sits down in the main room of the Tusaajiapik elders home in Kuujjuaq and pulls a sleek new tablet from its packaging.

The elders in the room don’t budge.

When Papigatuk invites residents to come over and look at the computer, a woman watching television waves her arm in disinterest.

Papigatuk laughs — she’s used to it. As co-ordinator of the Nunavik Elders Communication Unit Project, she sees it each time she installs a new iPad mini..

The project, funded by a Quebec seniors program (Municipalité amie des aînés) and coordinated by Nunavik’s Avataq Cultural Institute, is distributing a tablet to each Nunavik community for elders to use.

The project’s main goal is to help elders communicate with family and friends in other communities through Skype, an online video chat program.

“Some of them really oppose it a first,” Papigatuk said. “Then I start to explain that you can see your grandchildren growing up, or see friends that haven’t seen in a while. And then they say ‘Ah.’”

At the Tusaajiapik elders home, the ‘Ah’ moment happens fairly quickly, once some of the residents discover the tablet is also stocked with Avataq’s archived photos of Kuujjuaq, when it was known as Fort Chimo.

Soon a few residents are seated around Papigatuk as she shows them how to use the tablet’s touch screen to flip through images.

There are black and white photos of some of the community’s early families standing in front of skin tents in traditional clothing.

“It takes about a half hour to show them how to use it until they’re comfortable,” said Papigatuk, who is touring the region installing the tablets. “The iPad is much easier to use than a [desktop] computer.”

Kuujjuaq is the seventh community to have its tablet installed; she’s already delivered the machines to Inukjuak, Kangiqsualujjuaq, Ivujivik, Kangiqsujuaq, Salluit and even the YMCA patient boarding house in Montreal.

Over the next couple of weeks, Tasiujaq and Aupaluk will receive their tablets.

For communities that don’t have elders home, the tablets might get installed in health centres or community halls.

The program might be slow to start, but Papigatuk said she’s seeing it take off as more communities get connected.