“It always comes down to the money” 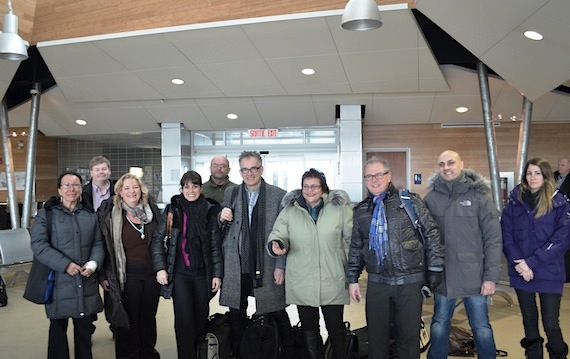 Minnie Grey, the executive director of the Nunavik Board of Health and Social Services, stands in the Kuujjuaq airport with a group of visit officials from Quebec City who visited Nunavik from April 2 to April 4. (HANDOUT PHOTO)

Nunavik wants Quebec’s new Parti Québécois government to listen to what people in the region have to say.

For most from Quebec City, the visit was their first to Nunavik.

Minnie Grey, the executive director of the Nunavik Regional Board of Health and Social Services, found them “very attentive to learning about our region.”

So, Grey made sure they left for home with a bundle of reading material about Nunavik along with better idea about the health board’s priorities of improving services for mental health and addictions treatment and for families and children.

For example, the board would like to see “family houses” in communities where families in crisis could receive help instead of immediately seeing their children go into youth protection.

“It’s not the child that’s the problem — it’s the family situation,” Grey said.

The health board has two more years under its current strategic plan to develop the targeted new services.

But there’s no additional money and no place to develop services such as community family houses, Grey said.

“We want to improve services, but where are we going to provide these services in the aging infrastructure we have?” she said.

That’s why part of the tour for the visitors from Quebec City included stops at the region’s two hospitals in Kuujjuaq and Puvirnituq, which both need more space and improvements, as well as a look at the Isuarsivik treatment centre, housed in one of Kuujjuaq’s oldest buildings.

“If we want to repatriate specialized services to our region, we are going to have to look at developing better services,” Grey said.

At the same time, Grey said it will be important to ensure that Inuit in the communities are involved in the services’ delivery.

For this, they’ll need additional training as well as equity in their working conditions with workers who are brought in from the South.

Along with new infrastructure, that will take more money, Grey said.

“It always comes down to the money, but if Nunavik can develop its action plans around the money that exists and prove that we are serious, the money will follow,” she said.

Unfortunately, because of bad weather, Quebec officials didn’t make it to Makivik’s recent annual general meeting in Kangiqsujuaq where many delegates were looking forward to meeting them, Tukkiapik said.

Among Makivik’s chief concerns: that the money Quebec gives to offset the high cost of living in “ the most expensive region of Quebec” isn’t keeping pace with the needs and growth of the population.

Quebec now gives Makivik and the Kativik Regional Government $5 million a year for programs which, among other things, offset the cost of gasoline, airfares and food.

And there’s the ongoing unmet need to build more social housing in the region, Tukkiapik said.

His message to Quebec: “the people who live here are neglected if you want to do development here, there are some needs we want to see answered.”

Makivik and the KRG, along with other regional organizations, are also fine-tuning what they want to see for the region.

Community consultations are under way on the Parnasimautik plan for Nunavik — which details what Nunavik needs to be ready for the future or as Tukkipik put it, “what’s important to us as Inuit? What do we want to maintain?”

Consultations started up in February in Kangiqsualujjuaq. Since then consultations have taken place in Akulivik and Ivujivik, with visits to Tasiujaq, Aupaaluk, Chisasibi and Umiujaq slated for April.

After the consultations wrap up next November, a report will be tabled at the 2014 Makivik AGM, Tukkiapik said.

Nunavik is also preparing a “regional plan for the integrated development of lands and natural resources,” intended to reflect whatever comes out of the Parnisimautik consultations. 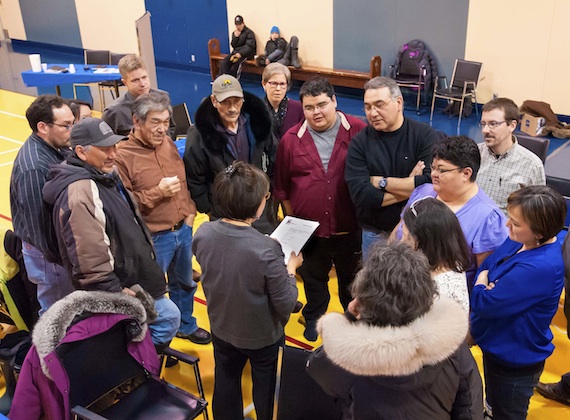 Jobie Tukkiapik, fourth from the right, surrounded by representatives from Nunavik organizations and their advisors, listens to Maggie Emudluk, the chairperson of the Kativik Regional Government, during a February consultation on the Parnasimautik plan in Kangiqsualujjuaq. (PHOTO BY PASCAL POULIN)