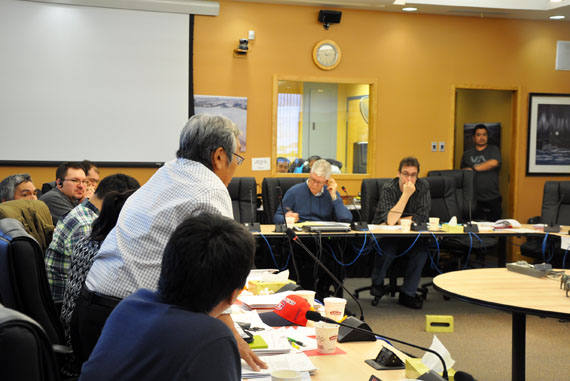 KUUJJUAQ — Nunavik is up against the clock again, waiting for Ottawa to confirm funding to pay for its share of social housing in the region for 2016.

The region’s most recent five-year, tri-partite housing agreement with the governments of Quebec and Canada ended in March 2015.

Nunavik was trying to negotiate more funding from the federal government, to help pay for a catch up program to help alleviate the region’s shortage, a need estimated at more than 1,000 units.

But the Conservative government at that time wasn’t ready to commit and instead proposed an interim agreement to buy more time.

Now, that one-year agreement is set to expire in March 2016, and the Kativik Municipal Housing Bureau needs to know if it can count on that funding before construction season starts.

Ottawa’s portion would build 60 units in the region next summer.

“We’re in the same situation again this year, we don’t have time to negotiate the rest of the agreement,” the Kativik Regional Government representative, Frédéric Gagné, told regional council meetings in Kuujjuaq Nov. 26.

“We hope to have something some time this winter.”

Those 60 units, though not yet funded, have already been allocated. Salluit, a community that is short an estimated 200 units, will get 16 units next year.

Kangiqsujuaq will get 14; Kuujjuaq 12, and Tasiujaq and Ivujivik will get four units each.

That now doubles the same number of units allocated to each of those communities for 2016 under Quebec’s Plan Nord funding.

Although negotiations will take time, housing officials in Nunavik said they’re optimistic about getting an agreement signed with the newly-elected Trudeau government.

When the federal election was initially called last summer, the Kativik Municipal Housing Bureau director, Watson Fournier, said officials told him that housing negotiations would be on hold until January or February 2016.

“After the election though, they informed us they wanted to sit down right away,” Fournier told KRG councillors Nov. 26. “So we take that as a good thing.”

The new Trudeau government has pledged to invest billions into building infrastructure, including housing — money the region hopes will make it north.

But Nunavimmiut say the social housing they do have must be maintained, and in many cases, is being neglected.

KRG councillors listed many problems with housing in their community Nov. 26 — from melted snow seeping through ceilings to sewage smells — that they say aren’t being addressed.

“With the number of complaints about renovations on homes, someone needs to be accountable,” said Tunu Napartuk, the regional councillor for Kuujjuaq.

“Who is it? If we have to keep fixing it over and over again, you’re creating a large group of very unhappy people.”

Fournier said that KMHB maintenance workers do the best they can with the resources they have, but that the organization is looking at ways to improve its renovation program.

As part of discussions with Quebec’s social housing agency, the Societé d’habitation du Québec, the KMHB is also revisiting its home ownership program, which subsidizes the construction of private homes in Nunavik.

Only about three per cent of Nunavimmiut own their own homes.

“Homeownership is not an option for everyone,” said Gagné. “We need more houses, and that’s why we’re looking for other ways to get it.”