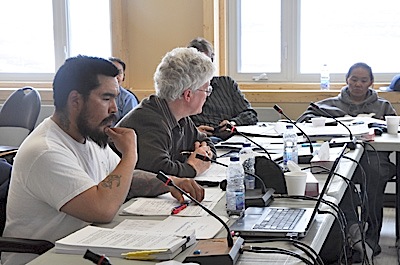 Daniel Oovaut, left, chair of the KHMB, and Watson Fournier, its executive director, field questions from KRG councillors at a regional council meeting in Inukjuak May 26. (PHOTO BY SARAH ROGERS)

INUKJUAK — Nunavik’s social housing agency says 2014 stands as the year with the highest amount of unpaid rent across the region.

“This, unfortunately, is our worst year ever,” said Watson Fournier, the KMHB’s general manager May 26 at the Kativik Regional Government meeting in Inukjuak.

“It represents almost 20 per cent of rents not paid, which is a big contrast to the previous year, which was almost zero,” he said. “Something will have to be done to encourage tenants to pay their rent.”

The housing bureau has accumulated millions of dollars in arrears since 2000 that it’s struggled to collect.

For the first time in 20 years, the KMHB collected more rent than it charged in 2013.

The surplus was short-lived, however, and Fournier pointed out that KMHB now faces a whopping $17.8 million in overall arrears.

That led the housing bureau to begin sending out eviction notices in 2012 to the more than 800 social housing tenants owing more than $3,000 in rent and not making regular payments.

The evictions caused an uproar across the region, where a housing shortage leaves Nunavimmiut few options for places to live.

But Kangiqsujuaq regional councillor Charlie Argnak asked whether the evictions were helpful in encouraging tenants to pay up.

“Almost any solution other than eviction is better, but we’re up against the wall,” Fournier said. “Everyone has an obligation to pay their rent.”

For those who struggle to make their monthly payments, Fournier said the KMHB is willing to be flexible with tenant’ payment schedules s to help them pay rent when they can.

“We’ll take any kind of arrangement with a person who owes us money, but there has to be some kind of arrangement,” Fournier said. “We understand there can be difficult situations. But you have to go meet the housing manager to arrange something.”

The KMHB continues to work on collecting rents, by rewarding good tenants through its Pivallianiq program, which holds draws for prizes throughout Nunavik to eligible tenants.