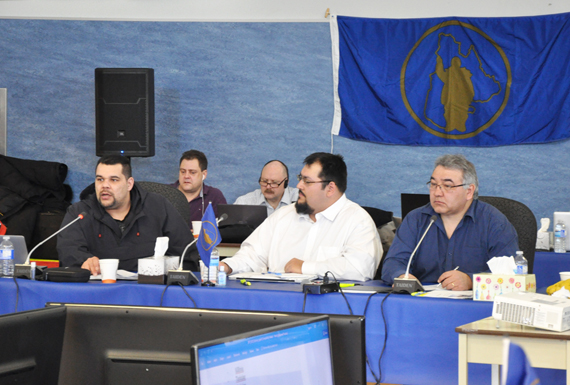 Andy Moorhouse, left, Makivik’s vice-president of economic development, speaks to delegates at board of directors meeting in Ivujivik Feb. 21. That’s where directors voted unanimously to create a new development corporation to oversee the region’s business interests. (PHOTO BY SARAH ROGERS)

Nunavik’s Makivik Corp. has launched a development corporation aimed at separating its business affairs from its political work and growing the Inuit birthright organization’s investments, Makivik announced this week.

The new corporate entity will oversee the day-to-day operations of Makivik’s subsidiary companies and joint ventures.

“That’s the difficult thing about being elected—you’re on the social side, the politics side and trying to develop business at the same time,” Makivik President Jobie Tukkiapik told Nunatsiaq News.

“Makivik has grown with its subsidiaries. We started with $159 million of cash equity and now we’ve surpassed $400 million,” he said.

“We want to make sure to take every opportunity to develop businesses in the region.”

Makivik’s board of directors voted unanimously to create the new entity during a meeting in Ivujivik last week.

Makivik is the last of the four Inuit land claims groups in Canada to launch a business arm. The push came from a committee struck last year to look at how the birthright manages its business operations.

The committee recommended the creation of a new corporate entity to hold the voting shares in Makivik’s wholly-owned subsidiaries, which include First Air and Air Inuit, with the ability to hold ownership in non-wholly owned subsidiaries and joint ventures.

A new six-member board of directors will be named to oversee the new corporation and Makivik’s business interests, apart from First Air and Air Inuit, which will continue to operate under their own boards.

“It’s more to ensure Makivik’s investments produce an acceptable cash return [and] give us the best chance to grow sufficiently,” Tukkiapik said.

“If we had kept up with the growth of inflation and the beneficiary population, ideally [ownership interests] would have been over $600 million.”

Certain files, such as social housing or mining development, can bridge both social and business interests, Tukkiapik notes.

Makivik is still working out the selection and criteria for its board of directors.

Of the development corporation’s six-member board, three positions are reserved for James Bay and Northern Quebec Agreement beneficiaries while three other positions require both business experience and a professional designation.

The new corporation should be in place by the summer of 2017, Tukkiapik said.

Makivik hopes to select an Inuktitut name for the new corporation at its annual general meeting, planned for March 20 to March 23 in Tasiujaq.