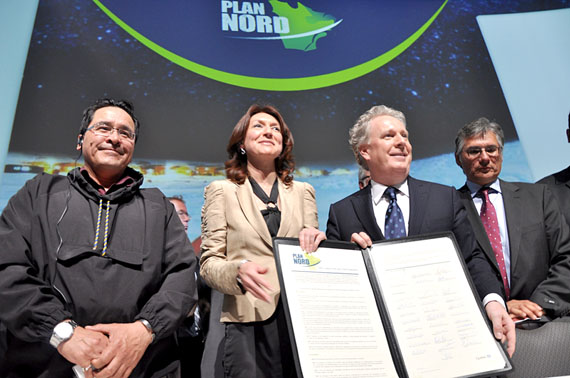 Pita Aatami, the president of Makivik Corp. (left), poses with Quebec cabinet minister Nathalie Normandeau and Quebec premier Jean Charest alongside other northern leaders at the May 9 launch in Lévis, Que., of the province’s 25-year blueprint for the North. (FILE PHOTO)

Nunavimmiut discussed just about every political, economic and social issue facing the region at their recent meeting on Nunavik’s future government.

But one thing is clear — they want to control their own destiny, Makivik Corp. president Pita Aatami said in a Nov. 21 interview.

“I think we’re all talking the same language,” said Aatami, who co-chaired the three-day meeting in Kuujjuaq Nov. 15 to Nov. 17 with Inuit Tapiriit Kanatami president Mary Simon. “They want a strong government with decision-making powers.”

However, that doesn’t necessarily mean allowing Quebec’s Plan Nord to steamroll ahead.

Delegates at the meeting backed away from supporting Premier Jean Charest’s development scheme for northern Quebec — unless it proceeds with the approval of Inuit in Nunavik.

The Kuujjuaq meeting took place as debate over the development of Quebec’s north under its Plan Nord, heats up throughout Quebec and draws many critics.

Delegates said the Plan Nord should not move forward unless agreed to by the Inuit of Nunavik, although Nunavik leaders signed on to the deal signed last May.

“Plan Nord shall not prejudice the negotiations and implementation of the Nunavik government and should not proceed unless agreed to by the Nunavik Inuit,” they stated in a document produced at the end of the meeting.

Four delegates from each Nunavik community and representatives from regional organizations attended the recent Kuujjuaq meeting.

Their goal: to forge a common voice on any future negotiations for a Nunavik government, just over six months after people in Nunavik voted against the proposed Nunavik Regional Government, a model that would have merged regional organizations under an elected Nunavik Assembly.

“What has always been clear is that they want language and culture to be protected,” Aatami said. “They want a public government that encompasses all who live in the region; they want it to happen in one phase, as opposed to the two phases they would have had under the [Nunavik Regional Government agreement]. And they want to see control over the 55th parallel. They don’t want anyone else to control their destiny.”

Although the meeting’s original goal was to produce a declaration, delegates instead adopted a “discussion paper for a Nunavik government,” which delegates took with them to consult with their home communities.

Final recommendations will then go to Makivik’s annual general meeting in Chisasibi in March 2012, to serve as a launching point for future self-government negotiations.

“If the people give us the go-ahead, Makivik will approve this by resolution,” Aatami said. “But we want the people to decide. There is no movement until have a clear mandate from the people themselves.”