Nunavik iron mine project forges ahead 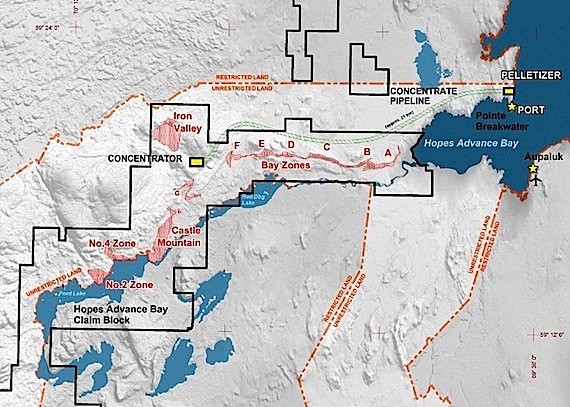 This map from the preliminary economic assessment for the Hopes Advance iron mine shows the huge iron mine and related infrastructure that Oceanic Iron Ore Corp. wants to build near the Ungava coast community of Aupaluk.

Plans for a huge iron mine near Aupaluk, the smallest community in Nunavik, are moving ahead, following the recent release of a preliminary economic assessment.

That document, prepared by Micon International Ltd., shows the mine’s developers, the Vancouver-based Oceanic Iron Ore Corp., can recoup the $3.7 billion cost of building the mine within less than two and a half years.

The iron deposits owned by Oceanic range from the Roberts Lake area north of Kangirsuk to the Morgan Lake area, about 50 kilometres from both villages, to Hopes Advance Bay in the south, which lies only 10 km from Aupaluk.

Oceanic plans to mine Hopes Advance first and quickly — if possible, by 2016.

With the international iron ore price likely to remain above $150 a tonne until 2020 — and perhaps as high as $200 a tonne, Oceanic and Makivik Corp. — which are working towards an impact and benefits agreement — are likely to see large amounts of money flow from the mine, the preliminary economic assessment shows.

Under Oceanic’s preferred scenario for development for the Hopes Advance iron mine, the mine, located about 20 km from the potential deepwater port site at Ungava Bay’s Pointe Breakwater, will cost $3.7 billion to build.

The infrastructure includes a 21-km pipeline from the mine’s concentrator to a pelletizer near the port.

To finance the mine’s infrastructure, Oceanic may partner with European, Indian, Middle Eastern or Chinese steel mills or “go it alone,” its chief financial officer said this past July.

Every year the Hopes Advance mine would produce 20 million tonnes of high-grade (66.5 per cent) iron concentrate in pellets.

Based on the price of iron per tonne at a conservative $111 per tonne, the payback of the mine’s capital costs will take place only 2.4 years into its 23.8-year-long lifespan, the preliminary economic assessment says.

“Green hydroelectric” power is expected to fuel the mine. Oceanic is working with Hydro Quebec on the “delivery of power both to the Company’s project areas and to local communities in a timescale to suit the development of the Company’s projects,” the preliminary economic assessment says.

That power would likely come from the Brisay generating station located on the Caniapscau reservoir south of Kuujjuaq.

Oceanic, with Makivik’s backing, also wants Quebec to use that connection to the provincial power grid to run a high-speed fibre-optic internet connection to Nunavik.

Oceanic plans to ship out its ore directly from Hopes Advance Bay to China on giant-sized carrier ships during summer and through trans-shipment during winter season.

The company is looking at using the fiord near Nuuk, Greenland as trans-shipment location, Greeland, the preliminary economic assessment reveals.

The company has also been lobbying for support from Quebec for assistance with a deepwater port.

This summer Oceanic sunk more than $12 million into drilling and other exploration activities to get a better idea of the size of the iron deposits.

In August, Makivik, Aupaluk’s landholding corporation and the Oceanic also announced that they agreed to the terms and conditions on which Oceanic would continue to develop its Hopes Advance Bay project near Aupaluk, and “set a basis” for a later impact benefits agreement.

Oceanic has also put former foreign affairs minister Lawrence Cannon in its board of directors.

Over the coming months, Oceanic will be focus on producing other social, environmental and economic assessments to move the project ahead.

“In addition, the Company will continue its work at all levels of government and with Inuit representatives to ensure good communication and dialogue; and that its infrastructure requirements are understood and implemented in a timely manner to support the development of its Ungava Bay project areas”

Within five years Adriana Resources wants to start a mine building a mine at Lac Otelnuk.

Its $8.5 billion joint venture project China’s Wuhan Iron and Steel Co. Ltd. wants to produce 50 tonnes of iron a year for up to 100 years.

But to do this, they need an 850-km railway line from Lac Otelnuk to Sept-Iles— as well as major improvements to the port there.