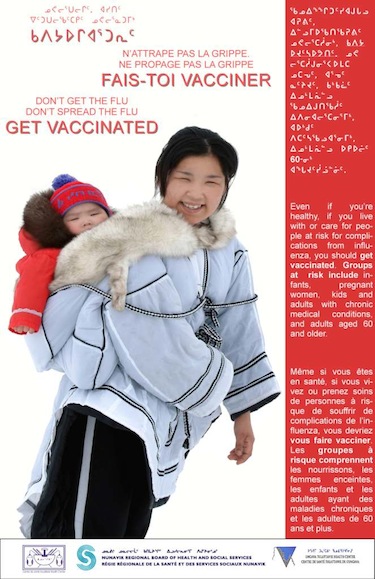 This poster produced by the Nunavik health board is urging people in Nunavik to make sure they’re protected against the flu by being vaccinated.

Nunavik public health officials have finally spelled out how Quebec plans to fight measles in Nunavik.

Last month, Quebec started a massive province-wide campaign to vaccinate or re-vaccinate all students against measles because Quebec is facing its largest measles outbreak in years.

Right now Nunavik health officials are checking whether kids from Grade 7 to Secondary III have received the two vaccination shots required to protect them against measles, said a news release from Nunavik’s regional board of health and social services, dated Nov. 10, but sent out Nov. 23.

If not, their parents or guardians are being urged to make sure the children receive their needed vaccinations.

Shortly, all Nunavik staff and teachers who don’t originally come from the region will be asked to receive vaccinations if they can’t prove they are adequately protected by previous vaccinations.

About 85 per cent of all staff, students and students in Nunavik schools already have been vaccinated against measles.

The goal now is to raise the coverage rate to 95 per cent in all schools, the heath board said.

Starting in the spring of 2012, the vaccination campaign will start to focus on kids in Grade 4.

Nunavik residents after 1970 who don’t think they have been adequately vaccinated against measles can also go to their local clinic and receive the missing doses if required, the health board said.

Measles is a highly contagious disease caused by a virus and transmitted through direct personal contact with an infected person and by airborne droplets. Symptoms of the measles include a fever of 38.3 C or higher, cough, runny nose and red eyes.

After seven days of fever, a giant, blotchy rash starts to appear behind the infected person’s ears and face before spreading to the rest of the body.

The disease lasts from one to two weeks, and at least one person in 10 has to be hospitalized.

Measles can also lead to serious complications, such as an infection of the lungs or brain.

Infected people are contagious for four days before and four days after the appearance of the rash, warns information recently distributed by Quebec health authorities.

In 1952, a measles epidemic in northern Quebec killed 10 per cent of the population in many camps.

In 1989, during the last outbreak of measles in Quebec, more than 10,000 cases were reported. Most of those affected were children of school age. There were 656 hospitalizations, 10 people contracted encephalitis, which causes swelling of the brain, and seven died, according to a brochure circulated in Quebec schools to promote the measles vaccination campaign.

While usually Quebec sees only one or two cases a year, in 2011 there have already been more than 760 reported cases, most of them from the regions between Montreal and Quebec.

It’s the largest outbreak in North America and South America since 2002, when the Americas were declared “measle-free.”

There is no specific treatment for measles, Nunavik’s regional health board said.

Basic treatment may be provided to alleviate the symptoms, such as medication to lower fever, said Dr. Serge Déry, Nunavik’s director of public health.

“Vaccination remains the best way to prevent it,” he said.