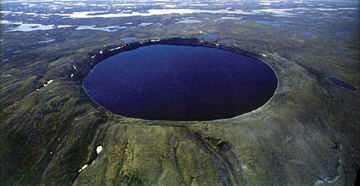 Now visitors to Nunavik’s Pingualuit provincial park will be able to surf the internet at the Manarsulik accommodation centre near the crater. (FILE PHOTO)

The Kativik Regional Government, created in 1978 by the James Bay and Northern Quebec Agreement, delivers public services to the nearly 12,000 residents of Nunavik’s 14 communities.

At its quarterly meeting, Sept. 10 to Sept. 14, regional councillors discussed a variety of issues.

These included an intervention plan for the region, composting and recycling, land protection, the new federal electoral riding proposal, the impact of Xstrata dividends on welfare rolls, and Nunavik’s youth association.

Among the other discussions of the regional councillors, meeting for the last time before November’s municipal elections:

At the Puvirnituq airport, holiday and sickness leave left the major Hudson Bay hub short of observer communicators this past summer.

This forced KRG’s transportation department to operate the community radio station on a reduced time schedule with one observer communicator on standby during the night for medevac flights.

The transportation department’s report to the KRG meetng in Kuujjuaq said that one medevac flight had to be diverted to Kuujjuaq in August.

Davidee Angutinguak, the regional councillor for Aupaluk, said it’s also been difficult for his community of 160 to maintain airport operations.

“The reason we aren’t functioning well at our airport,” is that workers have been, “taken from the community due to the court system,” he said.

From 2007 to 2012 the KRG received $340,000 from Quebec to help operate the program which has buses running in several of the larger communities.

But, while you can pay a dollar in Puvirnituq and ride from one end of the community to the other, in Kuujjuaq, there is no public transit system.

There, the KRG is looking at instituting a subsidized taxi system, Nunatsiaq News learned at the recent KRG council meeting in Kuujjuaq.

With the speed of internet in Nunavik still about 20 times slower and two times more expensive than in southern Quebec, the KRG’s Tamaani internet service provider continues to increase the bandwith for Kuujjuaq, Inukjuak and Puvirnituq.

Meanwhile, the KRG has also brought internet into the Pingualuit provincial park.

This past summer the KRG completed construction of the Manarsulik accommodation complex near the Pingualuit crater, installing solar panels and wi-fi, “to enable visitors and staff to conveniently access the internet.”

At the same time, inuksuit were built to mark the trail from Manarsulik to the crater that forms the centrepiece of the park.