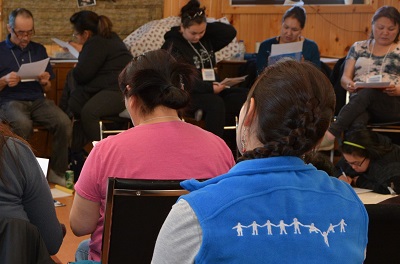 Nunavimmiut take part in Puttautiit 2018, the region’s annual suicide prevention conference that just wrapped up in Kangiqsujuaq. This week, regional leaders are sitting in on a two-day meeting in Kuujjuaq that aims to respond to a recent wave of suicides across the region. (PHOTO COURTESY OF NRBHSS)

Nunavik leaders are meeting in Kuujjuaq this week to discuss how the region should respond to a high number of suicides in its communities in recent months.

Kativik Ilisarniliriniq is convening the two-day meeting of community and regional organizations after sounding the alarm over a wave of suicides reported over the last two months—most of them among Nunavimmiut youth—that has overwhelming the school board’s resources.

The meeting’s facilitators include Anglican ministers Annie Ittoshat and Iola Metuq. The agenda for the first day, Tuesday, Oct. 30, includes a series of breakout workshops to identify what services and supports already exist in Nunavik’s 14 communities.

The Nunavik Regional Board of Health and Social Services is a major partner in the two-day meeting, to which it has sent its regional suicide prevention committee members.

During the meeting, participants plan to present Nunavik’s new 2019-24 suicide prevention strategy, which the board said is focused on the “commitment and cooperation” of all regional organizations.

“What we are going through in Nunavik is not necessarily individual based,” said Minnie Grey, the health board’s executive director. “It’s a collective societal problem that needs to be addressed collectively.”

As such, Nunavik’s school board officials have said the goal of the gathering will be to come up with plans for a more comprehensive response to crises in Nunavik—one where schools can rely on community support.

KI first called on regional leaders to meet after a cluster of suicides in Puvirnituq took a toll on the community’s school and support staff. Since the beginning of the year, at least 10 residents in the Hudson coast community have died by suicide, the youngest of them just 12 years old.

Across Nunavik in 2017, Quebec’s coroner’s office reported 22 deaths by suicide—one of the highest numbers in one year on record in the region of about 13,000.

Although many more recent deaths remain under investigation, Nunavik’s social service workers say the number of suicides across the region so far this year already surpasses that of 2017.

Representatives from the Quebec government are expected to attend the meeting. For its part, Indigenous Services Canada said it has offered support to Nunavik’s health and community representatives.